Enter DCU. Attendance wise, that is. As DCU fans already know, RFK usually attracts a good crowd. Beckham coming to town last week, coupled with Euro hype drew out a good crowd of 35,979. That was enough to catapult DC to above 20,000 for attendance average, thus surpassing TFC. In relative terms, however, TFC still reigns supreme in the East. Per the request of a BigSoccer member, I decided to look at the average attendance vs relative attendance per team. Today, due to time constraints, I've only done it for the East.
Also, for the sake of completeness, here's the official "MLS capacity" for each of the stadiums:
DC: 24,500
KC: 10,385
NE: 20,000
CLB: 22,500
TFC: 20,000
CHI: 20,000
NYRB: 25,576
Also keep in mind that some of these stadiums (RFK, Giants, Gillette) can hold a lot more in their actual NFL capacity. BMO field is listed at 20,000 but the stadium holds another three to five hundred more seats if necessary. Same goes for some of the other SS stadiums in the league, i.e. Dallas, etc. 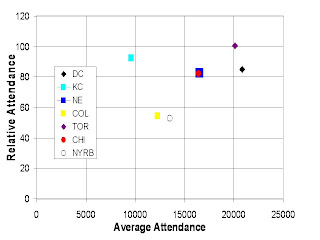 *Week 15 does not include 3 games from week 16. They will be posted next week. This is to avoid confusion when looking at the figures so that all teams are well represented.
Posted by R. Mera Velásquez at 11:20 PM