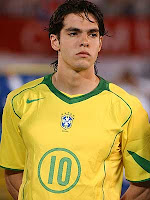 Amidst talks of clubs not allowing some of their players to participate in the U-23 Olympic tournament, new questions have been raised about the validity of the tournament and the relationship between the Olympic Committee and FIFA. Mainly Brazilian-based players Diego and Rafinha are affected at this point. Kaka was rotundly negated permission by AC Milan to join the Brazilian squad even though it was his personal wish to be at the tournament. Keep in mind that the Olympics are the only major tournament Brazil has never won.
Deportes de Primera radio hosts on XM Deportivo suggested that either the Olympic tournament would whither away by losing its rank in the top soccer competitions or FIFA would have to flex its muscle to intervene and make sure that teams cede their U-23 players. Such players include big names like Alexandre Pato, Lionel Messi and even our own Jozy Altidore. Another important thing to remember is that European clubs are weary of exhaustion for the players and potential injuries that would hamper a teams' chances in domestic play. In addition, teams have already dealt with the significant involvement of their more experienced players in Euro 2008 and world cup qualifying in the other confederations. Added to this is the fact that Olympic play starts near the end of summer break and at the beginning of the season for major European leagues. Jozy Altidore risks being out of contention for a spot in the first team for Villareal if he's on duty at the Olympics.
So what should the answer be? Make it official (FIFA) that all teams should cede their U-23 players for Olympic play. There are also 3 overage players that can participate in the event. I would hope those could be at a team's discretion. All that said, I hope FIFA can come to terms with this situation and we can have an enjoyable tourney. Argentina looks set to win it all as long as the players they called get to participate. Their team is absolutely loaded with the likes of Messi and Aguero leading a team that boasts overage players Juan Riquelme, Javier Mascherano and Nicolas Burdisso.
Enjoy the games (we hope).
*Olympic failure refers to Mexico's elimination at the qualifying stage. It was the term used by Mexican officials and what cost Hugo Sanchez his job. They tied Canada, lost to Guatemala and only managed +4 goals against Haiti.
Posted by R. Mera Velásquez at 2:27 PM

Who is going to the Olympics from the CONCACAF region?