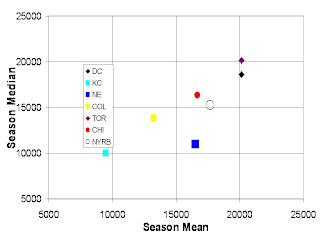 I concur with my BigSoccer soccerbuds that not much has changed this week in terms of attendance. A few small caveats, however. Dallas saw it's attendance values go up thanks to another sellout Beckham crowd. That also effectively brought their numbers up for the 08-07 difference and their deficit doesn't look quite so bad. Only Columbus and KC remain in attendance difference limbo and both teams have yet to see Becks come to town. The difference from the total final numbers for last season is actually just 289 below. It's safe to assume that final numbers may well be higher than last season's and echoing BigSoccer, this should be the second best attendance record since 1996 (founding of MLS). Some have postulated that maybe we shouldn't be counting that season either.
This time around I wanted to go a bit more in-depth into some of the graphical statistics. Previously I had compared relative attendance to average attendance numbers. I'm doing something similar with the plot on your right except this time it's average attendance vs median for teams in the eastern conference. This is also a way to show how one Beckham game can alter a team's mean attendance but it's median will still be quite small. Such is the case with New England although their higher mean is actually due to a double header with a Brazil international game at Gillette Stadium. When Becks comes to town the numbers should be even higher, effectively masking out the true nature of their poor attendance for a team that is unstoppable this season (minus Twellman!). The plot also reveals that although New York has seen its share of <10K games (2, to be exact), the majority of their games have actually been respectable. DC's median lags behind its mean while the opposite is true for the Crew, who saw the lowest attendance for a single game this season at 6733. KC's average is actually slightly less than its median and this even in an already small venue. TFC rules, enough said (and I'm far from being Canadian).
Posted by R. Mera Velásquez at 10:50 PM