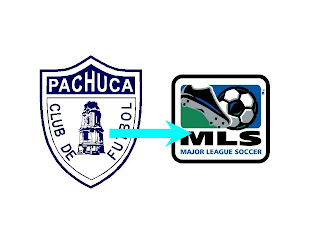 Since my buds over at MLSrumors are taking their time with this one, I thought I would break the news to the english-speaking world. The show Futbol de Primera on XM Satellite Radio's XM Deportivo had a report with an interview with Pachuca president Jesus Martinez in which he asserted that Pachuca is working closely with both MLS and USL with the possibility of bringing the franchise to the United States and putting a team in one of the above mentioned leagues. You can listen to it on the fdpradio.com website under "Jesus Ramirez y los proyectos de Pachuca" (in Spanish: Jesus Martinez and the Pachuca Projects). This is reminiscent of our report about CD America looking to do the same thing with MLS. I hope more information about Pachuca and MLS/USL will surface in the next few days. I thought that CD America coming to the MLS would be interesting, but with Pachuca I'm beginning to think we're pushing it a little. This is an American league, as some readers of this website have made clear in the past, one or even two teams loosely bound to teams abroad is one thing. We don't want to turn the MLS into another mexican league plus some original MLS teams. Personally, I'd like to see a Barca USA or Boca Jrs USA before another Club America or Tuzos USA. As far as them going to the USL , be my guest(they already have teams like Crystal Palace USA). That's something worth tapping into and can create a formative league for an ever expanding MLS, especially noting that the league is on the verge of adding two additional Canadian teams. But that's a story worth an entire blog entry.
Posted by R. Mera Velásquez at 10:46 PM

Would this actually be the Pachuca team or their juniors? Is this a top flight Mexican team? Excuse American ignorance.

Pachuca is a top flight team, in fact one of the oldest in Mexico and possibly the world. They have quite an important training system (facility). The president of Pachuca was hinting at various different possibilities, from youth to senior level and from MLS to USL. I'd be surprised if they made into MLS but USL is an option. That league is growing in giant leaps.

Here comes Pachuca and proudly this world class organization is close to calling Phoenix Arizona home. Look for the team in the USL starting play in either 2009 or 2010 and whatever the future holds it holds.

This is one of the worlds premiere organizations and the team to be placed on the field will reflect that level of play.