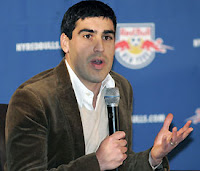 I thought I would give my thoughts on the latest development in the MLS. Multiple sites, including breaking news from SBI and ESPN, have leaked out the news that will be made official tomorrow: Claudio Reyna has decided to retire from soccer immediately. There will not be a long wait until the end of the season. There will not be a vacant hole in NYRB's midfield (or will there?). There will not be a designated player slot taken up in the East Rutherford-based side.
As I posted on the SBI site earlier, I must say I loved the guy and what he did for the sport in the United States, the national team, and American soccer player's reputation in Europe. I may even say he facilitated the move of McBride, Bradley, Altidore and Co.
NYRB needs to think hard about this one now. As far as the designated player rule is concerned, there is one allocation to each team in which the salary cap is non-existent and the owners can spend however much they want for a marquee player (Beckham, Blanco, Lopez, Gallardo, Angel). New York traded Amado Guevara to Chivas USA last year for a second spot. Guevara never worked for Preki (he now plays for TFC after a year in his native Guatemala). With this DP allocation, New York added Reyna on top of Juan Pablo Angel (who scored 19 goals last year).
As far as a new DP in MLS, Henry is a likely choice but so is Ronaldo and Adriana and Figo. No need to be hasty at this point and they may want to wait until next season to make a run for MLS Cup and a place in international tournaments. This, according to SBI and other sources, will likely be the end result. There's speculation that the $200,000 pro-rated money that is left could indeed be used this season to bolster the Red Bull's attack. A wise choice, I would say. There's plenty of players out there worth 200K that would pair up with Angel to furnish the dividends missing after Jozy's departure to Villareal.
In my humble opinion, and assuming that Angel is healthy, the DP slot should be given to an attacking midfielder, a great passer, a number 10 that could turn this team around and give it what it has so sorely needed for the 13 years of its existence... a title.
Or... maybe it's time to rework the salary cap and make the league more competitive in the process. I think Reyna's exit will mean more than just a great player's absence; it should mean a reevaluation of the league.
Posted by R. Mera Velásquez at 9:07 PM