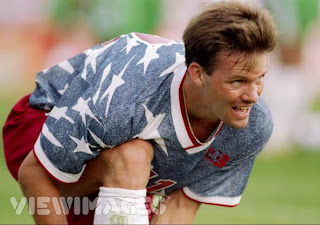 Truth be told, one of my more cherished soccer moments had to be the free kick* taken by Eric Wynalda against Switzerland at the USA '94 World Cup. For some wild reason (I was a kid and living in the USA prior to the internet and with little info on soccer) I hadn't taken into account that the world cup would take place in the United States before I (we) decided to spend the summer in Ecuador. Back then Ecuador was still a lowly semi-pro soccer nation beaten out of existence by teams like Bolivia and Uruguay.
Wynalda had to be my favorite player for the US squad. Alexi Lalas, Cobi Jones, and Tony Meola also caught my eye during that famed soccer event. Back then I used to side with Germany (noting my background in a German elementary school while growing up) and never sided with south american sides (Colombia, Brazil, Argentina). Thus, the USA's win against Colombia (yes, the demise of Escobar after his own goal comes to mind) saw me as the lone cheerleader in a living room full of Ecuadoreans.
Wynalda did more for US soccer than most will admit these days. He has been outspoken and ousted from ESPN for his flowery language and unfortunate references (repeatedly referred to C. Blanco as a player "he loved to hate" while praising him for his abilities on the field; also referred to flares in Bridgeview's Toyota Park as "looking like California" during its unfortunate wild fire stint a year ago). Wynalda also wrote his name in soccer lore with the first ever goal in MLS with the [cheeselly named] San Jose Clash. His goal scoring record for the national team (33, I believe) was only recently broken by Landon Donovan. I'm happy to say that his outspoken nature has not gone away and he will continue to grace us diehard soccer fans through the written medium in the MajorLeagueSoccer mag (yes, I subscribed). His latest rants deal with the coaching crisis in MLS and how he feels the better coaches are those who have risen through the MLS ranks as players in the league (Kinnear, Nicol, Preki, Nowak) and that supercoaches like Ruud Gullit simply won't work in the league because they aren't aware of its many facets (salary cap, long-distance travel, etc). I actually like Gullit and I think he may work . . . but that's another blog entry.

*I'll have video highlights of the goal once youtube starts working properly. You can view it here.
Posted by R. Mera Velásquez at 12:52 AM

My favorite USA memory from that tourney was Balboa's brilliant bicycle against Colombia which banged off the post. We should have won 3-1 darn it and perhaps then the unfortunate Colombian might not have been blamed.