Ronaldo to MLS? (Milan does not renew contract) 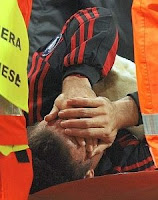 According to goal.com, "el fenomeno" Ronaldo has not been offered a contract renewal by his current club AC Milan. I thought I would break this story before others pick up on it to get my comments in.
Ronaldo is recovering from a ligament tear in his left knee suffered at a match against Livorno in February. He is expected to be healthy again in 2009. Considering that this is his second grave injury (right knee was the first one when playing for Inter) and that he's 31 years old (32 in September), he seems to be in Beckham territory at the moment.
Although he has been linked with a move to Fluminense, it would only be proper to have him continue his play in the MLS where his name is recognizable and where the speed and physicality of play isn't as demanding as in major European leagues (no offense, just being objective). I would put him in New York for obvious reasons. Ronaldo has been linked more than once with MLS and NYRB so it wouldn't come as a shock if it does actually happen. Thoughts?
Posted by R. Mera Velásquez at 3:31 PM