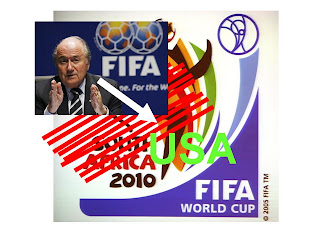 In a move that would shake up the soccer world and the United States, multiple sources are indicating that FIFA's alleged plan B for South Africa 2010 would be held in America. This news comes by way of XM Deportivo's Deportes De Primera morning satellite radio show, goal.com, fox, and many others out there. With possible moves ranging from Ronaldinho to the Galaxy and Ronaldo to New York, the US is increasingly becoming a key player in world football. More to come as I get the news.
Posted by R. Mera Velásquez at 11:05 AM

Does that mean we will construct some real pitches rather than these constrained American football monstrocities the MLS uses now? You should be able to feed a herd of cattle on a real soccer field.