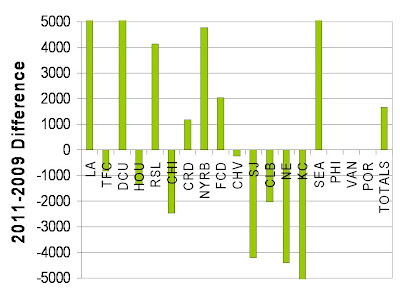 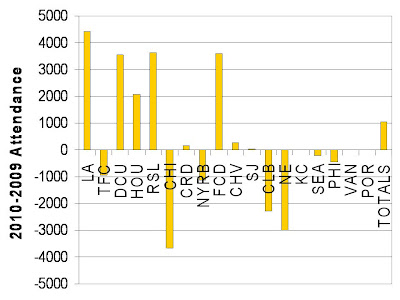 We are now in the 4th week of play and attendance remains strong for the most part. FC Dallas, although only having an average of just under 12,000 for their last couple of matches, still pulls off an average of over 14,000 given their sellout opening game. They are clearly doing something right both on and off the pitch. Vancouver has also had the novelty sellout crowds and continue to show how strong soccer is in the Pacific Northwest market. The Portland Timbers open their new home venue at Jen-Weld Field on Thursday. This match attracts special interest on my part, as I will probably attend a few games this season.

Some of the weaker markets are already showing their poor attendance, however. Most notable are New England and Columbus. A more detailed look at the difference between seasons is presented in the two plots above. For the yellow bars (2011-2010), New England lags behind last year's average by over 3,000. Compare that to 2009 (green bars) and it is over 4,000. Something needs to be done to address this. Not to mention that their total numbers are in the four-digit category. New England used to be one of the strongest markets early in the league's history. Is it management? Players? The venue? Steve Nicol is a great coach but sometimes fresh ideas can inject energy into a team (and crowd). Hyndmann did it for Dallas.

Also on the losing end is Columbus. The 2008 champions have struggled in attendance for the past couple of years, even with the presence of Barros-Schelotto. They also recently lost their jersey sponsor, Glidden, before their contract was up. Finally, Chicago is also well below their past attendance numbers when C. Blanco was playing. Bringing is Ljundberg and Nery Castillo payed very little dividends and aren't in the team anymore.

Expect other markets like Houston and Toronto to stabilize. Their fan base is strong and their stadiums are usually full. More stats will come by the middle of next week as a combo of weeks 5 and 6.
Posted by R. Mera Velásquez at 8:45 PM

Thanks for this site! Impossible to find figures and analysis on this anywhere else.

this is great info as to how soccer is growing within the US. I have a blog myself,which focuses heavily on world football FUTBOLFUTBOL . thanks again and see you on the site!

yeah this is great.. maybe include some figures about how TV viewership is changing thru the weeks.. i feel that along with attendance is an accurate barometer of how soccer is moving forward in the US as a whole