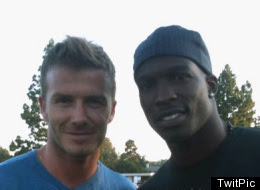 The United States is the land of the Media. CNN, MSNBC, FOX News, NY Times, Washington Post, MTV, ESPN, Fox Sports, Time Magazine, Newsweek, Comedy Central, National Enquirer are just the surface. Digging up new, interesting stories are what makes this country tick day in and day out. MLS is not immune. Is Freddy Adu the next Pele? Is David Beckham really coming to the US? Is Chad Ochocinco switching sports from football to futbol?

What started with the overplayed (and unfortunate) premature crowning of Freddy Adu as America's soccer darling was forgotten once it became obvious that he was just another gifted, albeit average, player. David Beckham's revolution of MLS also earned front page news but was quickly forgotten due to injuries and a backlash against his loan to AC Milan when it became apparent to the England FA that he was only viable at a "competitive team." Who wouldn't want to switch if it mean playing at the World Cup?

The most recent media circus involving MLS is Chad (Johnson) Ochocinco's desire to play soccer for Sporting Kansas City (previously the Wiz and then the Wizards). Suddenly, ESPN was all over the relatively weak soccer market in Kansas City. He became the sizzling news in the NFL aside from the impending lockout due to salary disputes. Hoards of reporters from various media outlets were present at SKC practice and reserve games (practice matches? really?).

So is this really good for MLS? Remember one thing, and I'm not overreaching with this: MLS tends to be an afterthought for most Americans, a parenthesis in an otherwise crowded sports scene, a curiosity when your kid is at soccer practice and you realize there is an American league. Ochocinco's publicity stunt is likely to remain what it is: just a stunt. 85 had a reality show where he was choosing from 85 bachelorettes, his TD celebration of "bribing officials," a person that chose to change his name to the Spanish for eighty-five even though he has no real connection with the Spanish-speaking community. How much stock are we willing to put into this when a BBC report on Ochocinco using an American soccer journalist was shrugged off by the BBC radio host?

The truth is that MLS is a growing league with ardent fans. The true fans are merely intrigued by the publicity stunts. They go to the games and enjoy the action. They applaud recent signings like Rafa Marquez and Omar Bravo as players that can contribute. They cheer for the new American stars like Juan Agudelo, Tim Ream and Teal Bunbury. They get their soccer news from dedicated, serious soccer journalists. That's the MLS, not these circuses.
Posted by R. Mera Velásquez at 2:09 PM