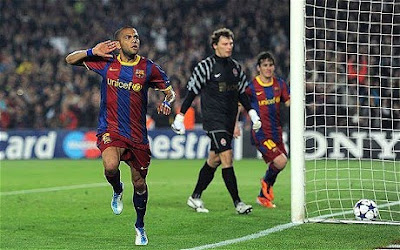 Okay, let's see: Real Madrid 4 - Tottenham 0, Inter 2 - Shalke 5, Barcelona 5 - Shakhtar Donetsk 1, Chelsea 0 - Man. United 1. Aside from the curious result in Milan, it is fair to say that the dominant teams in Europe (a.k.a. the world) are set for another run at the UEFA Champions League. Further, a repeat of 2009's Manchester United versus Barcelona is not out of the question. So, big money plus player development always wins.

And that's the kicker, the difference, the point at which the remaining teams can be separated from one another. It is "cantera" versus "cartera," meaning "quarry" and "purse." To develop a team from the ground up or to buy the best players in the world. FC Barcelona prides to call itself the former and uses local talent (also the spine of the World Cup-winning national team) to build the skeleton of the squad: Xavi, Pique, Busquets, Iniesta, Puyol, Villa, Pedrito. Real Madrid opts for the latter: Cristiano Ronaldo, Ozil, Kaka, Adebayor, etc.

In Manchester United we have a mix of the two, with the more obvious piece being the legendary architect: Sir Alex Ferguson. No insult intended towards Ancelotti, he is a superb coach. But something has to be said for a coach that has held on to his post for 24 years. He chooses his homegrown players well (Wes Brown, Paul Scholes, and snatches up local talent (Rooney, Ferdinand, Carrick). He also picks up interesting, but extremely productive players: Berbatov, Hernandez, Valencia, Ji-Sung Park.

For Barcelona, the path to the semifinal is all but laid out. For Manchester United it is a bit more complex: they must still defeat Chelsea at home. However, after today's glaring errors by the London squad, you have to like the "Red Devils" chances. Real Madrid has made its case and Tottenham will be tested to their limit at White Hart Lane (no Peter Crouch). Shalke 04 has assured the rest of the world that this Inter Milan team isn't the same without "The Special One" Mourinho at the helm. This also leads to a preemptive conclusion that Manchester United will be at the final.

More fireworks next week--for sure. Be champions!
Posted by R. Mera Velásquez at 7:50 PM