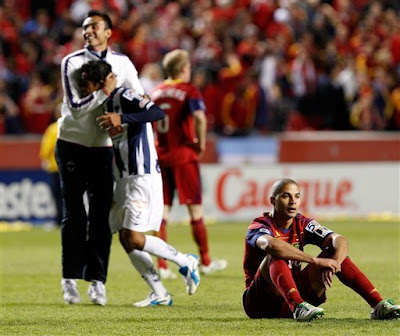 Photo credit: Kansas City Star
Real Salt Lake lost tonight's Concacaf Champions League final in a spectacular thud. Monterrey didn't overrun them. RSL had a 2-2 tie away-goal advantage and couldn't keep the Mexicans off the score sheet. They also failed to score on numerous chances. Tough luck for the team, the league and the soccer nation.

Monterrey simply attacked with their most potent weapon--Humberto Suazo--and got the goal they needed. Real Salt Lake lacked inventiveness within the box itself. Numerous times we saw Saborio, Morales, Wingert, Williams and Espindola just not getting that final shot. The ball landed in the area but they didn't have a clean shot. Good defending? Perhaps.

And then there's one very obvious fact: no Kyle Beckerman. The RSL captain and US international was suspended due to yellow card accumulation (that yellow, incidentally was wholly unwarranted). He is a leader in the midfield and a player counted on to disarm the opponent's attack. Real Salt Lake may be a deep squad, but it's obvious that Beckerman wasn't easily replaced. Not by a long shot. Suazo and Ayovi cut through the Claret and Cobalt's mid line without mercy for much of the match. RSL was left to chase the game for most of the second half.

It was a crude, cruel, rude awakening for MLS fans. This wasn't going to be their year. Not yet. Not so even though the pieces were clearly laid out for the league to acquire its first continental cup in the modern era (for LA and DC wins and why they don't compare click here). Jason Kreis was going to be the messiah for the league, the coach that finally brought the cup home. Real Salt Lake would be the breakthrough squad. International spotlight would be on the league, and this time for soccer reasons.

But that's how it works in sports. Not even mighty Real Madrid could thwart Messi and Barcelona, not even at home at the Bernabeu in the UEFA Champions League. Why should Salt Lake be any different? It's time to pick up the pieces and get ready for the next tournament. MLS did a good job with incentives to win this tournament, and general support was impressive.

So thank you, Real Salt Lake. Your team and your fans make us proud of our league. In victory and in defeat, American soccer fans stand behind you.
Posted by R. Mera Velásquez at 1:15 AM