Wake-up call: US U-20 fails to qualify for World Cup 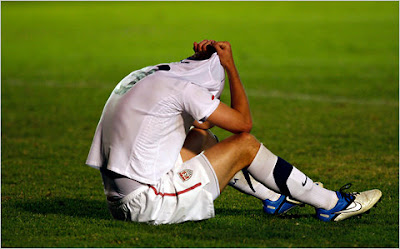 The US youth system's Under-20 national team has qualified for every single World Cup tournament since 1995. Last night, however, a determined Guatemala side halted the US team's progress and eliminated them from the competition. How do we proceed after this?

Let's settle a few things. The game: poor defending and lack of final touch. Also, Guatemala played great defense and awesome saves by their goalkeeper. They were also at home with a sellout crowd. A game versus Honduras would have been more accessible, in theory.

The team: this was supposed to be one of the most talented U-20 squads in recent times. It was likened to the Bradley-Altidore-Adu team of 2007. This team boasted Salgado (#1 1st round pick in MLS), Conor Doyle (Derby County), Gyau (Hoffenheim), Bobby Wood (1860 Munich), Agbossoumonde (Djurgården), Perry Kitchen (DC United), Okugo (Philadelphia), Sebastian Lletget (West Ham). Sometimes, when a team is too good, their ego can be their undoing. Might this be the case?

The coaching staff: This is where it gets interesting. Thomas Rongen is a great coach. He has been at the helm of the U-20s since 2001. In the process, he left out Neven Subotic, among others, in previous tournaments. He peaked with the Adu-Altidore team of 2007 and never quite recovered. Perhaps it's time to shake up the staff?

In the end, it was comedy of errors that unraveled the US squad. A necessary evil in order to expose a stagnant youth development. If no changes are made by US Soccer, it is another point of criticism by American soccer media and US fans like yours truly. Please keep this in mind: these are the players of the 2014 and 2018 qualifiers and the future of the American soccer system. Dominant teams are expected to win in tough matches. Is the US still a dominant team?
Posted by R. Mera Velásquez at 1:41 PM

US Soccer has always seemed to operate in a two steps forward one step back sort of a fashion. Hopefully these latest setbacks with the national team losing to Paraguay and the youngsters failing to qualify is followed by a great deal of success in this summer's tournaments.

Amen to that. I chose my words carefully.