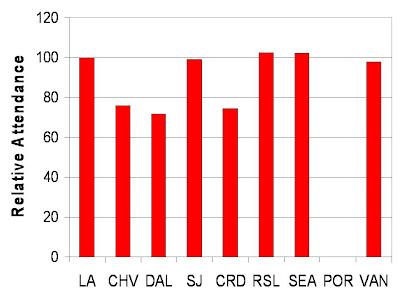 Week 3. Interesting trends. Scheduling is always tough in a sports-mad society like America. With MLB opening days and March Madness, not to mention ongoing NBA, and one has to have priorities. Clearly, for some of the markets, MLS isn't a priority. New England continues to struggle with their attendance no matter who comes to town. This time it was the Timbers and I enjoyed watching some Timbers fans in the stands. Also on the same boat is Red Bull New York. Their impressive stadium always looks a bit sad when the Red Bull logo is so prominent in place of spectators.
Dallas, who had an impressive opening day, also collapsed in the second week. The same is true for the reigning champs: Colorado Rapids. Their figures for this week didn't hit the 5 digit mark. Granted, it was cold and snowy, but that usually doesn't stop fans in this country. And props to those that showed up. It's tough getting there when the weather's bad. I know first hand. And yet, the LA Galaxy holds strong in their attendance, nearly 25,000 this week. And the signs held up by fans reading "We love Beckham" brings it right home. It's about stars, and it's worth it when it is. Then again, the west coast is much more consistent in attendance than the east. Just have a look at the relative attendance as of week 3: