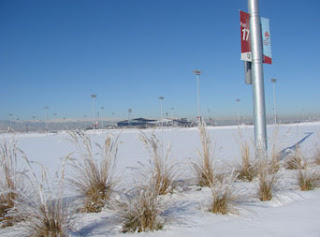 Well, sort of. Due to inclement weather, the game never took place. It was perhaps the Rapids' last unofficial preseason match before their debut at Chivas USA this Friday. The game was against a local Colorado college team [will add name here] and it took place at one of the Dick's Sporting Goods Park's complex's many practice fields. A satellite picture will show you just how many fields there are (just look for it in Google maps).

So today isn't as much about the game or even the players... it's about being an American fan of the world's game. I was in the company of my mentor and her husband (I'm currently in Boulder as part of my degree) and we were there to watch their son play in his first competitive match since recovering from injuries. It had been quite a long time, I was told. The man, I unfortunately didn't get a chance to meet him was part of the Rapids' opposing team, so we were likely going to cheer for his team.

We made the trek down from Boulder to Commerce City (Northeast of Denver in their oil refinery sector). At the time it was a steady rain/snow mix. It would become one of the Front Range's legendary spring snow storms (still snowing heavily as I write). We had only his word as to the status of the game, and last we heard, it was going to happen.

My first impression was the scale of this soccer-specific structure...from the outside. State-of-the-art facilities with a great design and an extensive set of 24 practice fields. The field in which they would play (#20 on their map) was in excellent condition aside from the slush being zealously cleared of by a type of reverted snow-shovel cart. Weird stuff. I wish I had had my camera. I will have an opportunity to see the stadium in all its splendor at the Rapids' opening match next month.

Sadly, due to the nature of today's game, stars such as Cummings, Mastroeni and Conor Casey were absent. This was an understandable precautionary measure to safeguard their marquee players. Indeed, today's rapids contingent was only 15-or-so strong. I was right up next to them, however, and they walked around me as they left when the match was "canceled." Long story short... when the referee arrived with his bag of balls it took only a few minutes for a final decision. Never mind that both teams had been running around, stretching and prepping. No scrimmage is worth an injury for an athlete.

It was sad that the game ended before it started. The moral of the story is how myself and two others (very much soccer fans) went out of our way to witness a game that never materialized... only for the love of the game (and for them, for their son). My mentor is a Jamaican native and I will share with you some extraordinary words she wrote years ago about her experience in France '98. That, however, is a separate blog entry.
Posted by R. Mera Velásquez at 11:33 PM