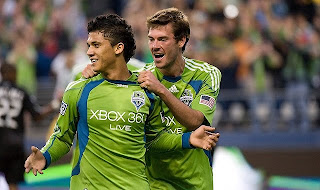 Just a few thoughts as we open MLS' 15th season. That's right... 15th season. It seems like just yesterday we were talking about Carlos Valderrama, ridiculous shootouts, countdown clocks and team names like Clash, Mutiny, Burn, Fusion. Not anymore. After the Beckham experiment blew up and simmered down, MLS rose from the ashes with Seattle as a flagship of success. The Sounders posted the highest average attendance ever for an MLS soccer team last season (>30,000) and are poised to break that record once more. 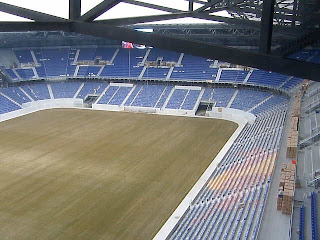 On the field things have also changed. Although Beckham may be hurt and Blanco is on leave at Mexico's Veracruz (hoping for a spot in the World Cup), rising stars like Christ Pontius, Freddy Montero, Sean Franklin and Marvell Wynne are quickly proving that the league can produce quality players. Former graduates include Eddie Johnson, Jozy Altidore, Clint Dempsey, Tim Howard (ringing a bell yet?). This surge of talent is complemented by veterans like Kasey Keller, Freddie Ljundberg, Landon Donovan, Juan Pablo Angel. This is what makes this league stronger every year.

A few questions remain: Can MLS compete internationally? Can stadiums outside of Seattle and Toronto be filled with fans? Can new franchises be sustainable? All will be addressed by the league in due time and we may see glimpses of this on the present season. 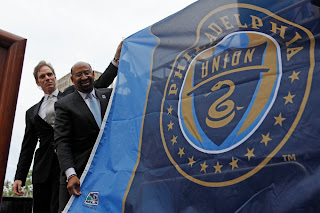 Watch out for rising stars like Danny Mwanga and Jack McInerney in Philadelphia's new team, as well as Opara in San Jose, among others. New signings and/or designated players (expensive guys like Beckham) are on the horizon and something tells me we're likely to see them right after the World Cup...Henry, we're looking in your direction. Also, behold the majestic Red Bull Arena and the cozy PPL Park.

A great opening game tonight and Seattle showed why they may be the team to beat this year.... Let's have a great season!
Posted by R. Mera Velásquez at 12:11 AM