Confesions of a soccer fan: Jamaica in France 98 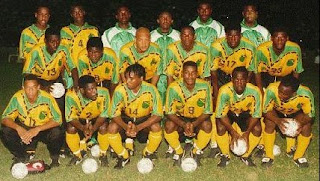 On a previous post I had promised I would bring you something a little different. My mentor here in Boulder, Colorado is a huge soccer fan. She grew up with the game in a soccer nation: Jamaica. I chronicled our trek to see a Rapids preseason match that did not materialize. Here, I present some words she wrote 12 years ago to the Rapids River Ratz fan club highlighting her experience in France 98. I only hope someday I can share the same type of story. I've been to many soccer games but not World Cup.

One bright spot in British soccer

If you have never been to a World Cup match, you are missing a wonderful experience. As John (Wright) wrote, the atmosphere at these kinds of events can be electric if the fans are in the right mode and they were for the Jamaica/Croatia match. Too bad we can't say the same for the Reggae Boyz. They forgot how to play basic soccer.

The papers reported that about 105 coaches left from England to Lens and included many English and Scottish fans. They blended in with the party atmosphere of the Jamaicans (those resident abroad and those who flew from Jamaica). Their behaviour was the antithesis of the trouble makers at the England/Tunisia match. A busload of English teenagers were next to us and they said that they wouldn't go to see the English play only the Jamaicans. They were all painted with black, green, and gold. 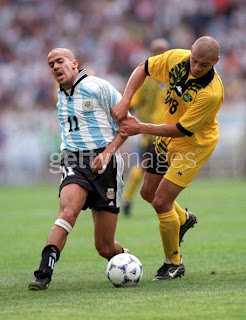 People were cheering us on all the way from London to Lens. Outside and inside the stadium was like a big international carnival. People of all nationalities were singing, playing music, and dancing together. Many Croatians fans arrived wearing both Jamaican and Croatian merchandise. A local band dressed like the Blues Brothers worked the crowd with some bluesy reggae. My cousins and I made a banner (green with yellow flourescent paint that should have been visible to the left of the Croatian goal in the first half). It will probably be in many photos and on the local TV station because some people started playing music and dancing in front of it. I brought a small tambourine and the middle was beaten through by the second half of the match.

Most of the Jamaican play (or lack thereof) was embarrassing to watch. We were screaming at them to put defenders on the posts for the corners and freekick but to no avail. You could see the goals coming from a mile away. All the goals were from set plays and we were out of position The only consolation (if it can be called that) was that the mistakes that lead to the last two goals was not caused by one of the regular amateur Jamaicans but by one of the professional new additions (what the people in Jamaica are calling "waggonists") who had been waiting for England to call him. I hope he doesn't play in the next match and that the other guys play with more fire against Argentina (who did not look as good as expected in their first match). At least Mexico held the Concacaf flag high. Here's hoping for better results for Jamaica and the US.
Posted by R. Mera Velásquez at 8:15 PM