US vs Holland: step by step 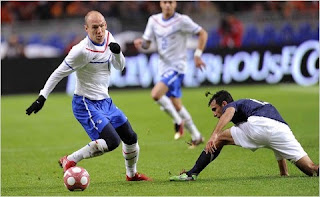 Today, the USA played the #3 ranked team in the world, the Netherlands, and although it wasn't a positive result, the game still had certain value for the team. Bob Bradley himself said he had learned "a few things" from the match, especially given Beasley's performance and companionship for Jozy.

Yes, the final score was 1-2 in favor of the Dutch, but let's explore that a bit further: the first goal occurred due to a misguided move by Bornstein when he tugged on the shirt of a Holland player and created a penalty for the opposing team. The second goal was due to brilliant play by Sneijder, Huntelaar and company, and although Howard may have had it, an unfortunate bounce (off Bornstein) deflected the ball to the back of the net.

But the Americans bounced back near the end of the game. Even though Donovan was muted during most of the game (perhaps through clever marking or maybe fatigue due to Everton play), players like Bradley, Edu, Holden, Torres and especially Beasley, created the situations and provided Jozy with the ball. The American's goal came due to sheer perseverance and by Captain America, Carlos Bocanegra. It was a set piece, America's secret weapon.

Jozy Altidore once again showed his class, but he was missing a counterpart. It may be interesting to see him paired with Donovan or Dempsey if charlie Davies is unable to come back. Holden's early injury was a blow to the team's attack, but Beasley stepped up and may have sealed his place in the team for South Africa (as long as he gets minutes with Rangers).

I think you meant to give Bstein a -4. He should never get in a game again for the national team, almost every mistake on defense was his responsibility. As a whole, tho, you are right they didn't play all that badly. Torres showed some signs of deserving a spot for sure and adding Onyewu to Demerrit will give us a real tough back line. Can't wait for the Cup!

Bornstein is still the better option at left back unless we shift Spector there (it's where he plays at West Ham). Heath Pearce is on the rise, though. It's about who's playing better for their club. Bocanegra can also play there (for Rennes) but he's slowed and isn't dominant in his crosses.

I hope to God you end up being wrong - we would have been better off playing with 10 guys. The leg breaking incident didn't help either, hell we may end up on the national team by the time the cup roles around. I will make Bstein look like Pele.

Reading various reports/comments, I noticed that Bocanegra is likely to get the left back spot if Bornstein can't get his act together. Small errors aren't small in a World Cup. Boca may be slower, but he's steady and has experience in that spot. That was his position vs Spain in the Confederations Cup.

I have no problem with Bocanegra in that spot. We have an historic opportunity in this World Cup and although injuries are doing their best to derail the team, we need to take advantage of our weaker group. Never before has the national team had so many players competing at such a high level in the best European leagues. All that being said we are still fragile and cannot afford mistakes like the utterly unnecessary penalty Bstein drew (and he could have easily drawn another for a handball that was not as much his fault).