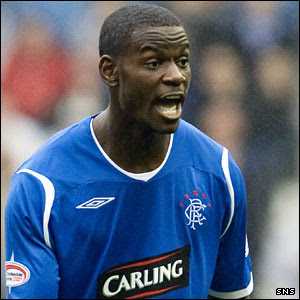 Who would have thought just a few months ago that Maurice Edu would bounce back to the American soccer picture with enough momentum to become an impact player? That's what happened today as he scored the winning goal in one of the most heated soccer contests in the world--the Celtic - Rangers match of Scotland. It was an injury time, scavenger goal, that only comes when a player is on his moment.

What happens now? First, a definite start against the Netherlands in Amsterdam for Wednesday's Fifa date friendly. Next, continuous playing time for Rangers, which is now almost assured the Scottish Premier League title. Finally, Edu may be well on his way to starting alongside Michael Bradley during the World Cup. This is true if Ricardo Clark is unable to make an impact in Germany.

Edu has considerable defensive abilities that might make a difference against foes like England. Torres and Feilhaber are more likely to play against more accessible foes or as supersubs. Edu can also play as a center back, adding to his functions in the national team (he played this position in the 2008 Olympics). It is a crowded midfield, yes, but this may allow Dempsey or Donovan to play as forwards, especially given Charlie Davies' potential absence.

It has been a month worth remembering for our younger players. Adu, Edu and Altidore are making their mark in Europe and re-writing American history in the world's greatest game.

Explain the title, is Edu like a raging Nazi or something?

No harm intended. Edu and Beasley have seen terrible racism while in Scotland. This is a punch in the face to all the haters, methinks.

That sucks, I'll have to punch some of those hooligans in the balls when I get over there for a visit.