Vive les bleus! That was the chant in 1986 as Michel Platini worked his magic to get past Brazil to a semifinal date with Argentina. It was also the chant when they played again, 12 years later, in St Denis outside Paris... and when they beat Brazil, again, but this time in the final. That's the story of the French national team with me. Always a favorite, always able to get past Brazil. Always controversial. They have two Euro championships (1984, 2000), two Confederations Cups (2001, 2003) and one World Cup (1998).

France is a nation with deep roots in world football. France was present at the inaugural and 1934 World Cups but did not advance far in those tournaments. They hosted the World Cup in its third and final tournament before World War II in 1938. They advanced to the quarterfinals in that tournament, losing to eventual champions Italy. In the 1950s, France saw a golden age with players like Just Fontaine (13 goals in one tournament, unmatched since then). They lost 5-2 at the semifinal in 1958 to eventual champions Brazil courtesy of a Pele hat trick. The French saw a significant decline in the 1960s and 1970s before roaring back to the scene in the 1980s. 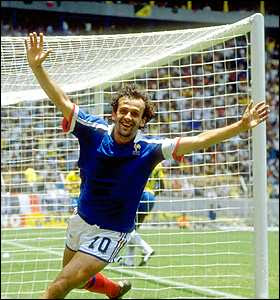 This is where the story begins. Easily one of the most memorable games in my memory, Brazil-France in 1986 cemented the team as one of my favorites. It was Platini versus Socrates. It came down to penalties...and the French prevailed. Since then, not one team has been able to knock out Brazil from the competition except for Argentina (1990). When France didn't meet Brazil (1994, 2002), the "Samba boys" won the tournament. When they met (1986, 1998, 2006), the French ousted the Brazilians... Pattern? Maybe, because in sports, as we know, psychology plays a major role.

Two World Cups passed with a glaring absence (1990, 1994), as France failed to qualify twice in a row (once against Bulgaria in 1993 courtesy of Hristo Stoichkov). But the Gauls would return with a vengeance. They were hosting 1998, and what a tournament that was! For the first time, 32 teams were included. For the first time, Asia and Africa were dully represented. Who can forget games like Nigeria-Spain or Brazil-Chile? And as for the French team? Just say the names: Zidane, Henry, Petit, Deschamps, Laurent Blanc, Trezeguet, Dessaily, Vieira, Thuram, Fabien Bartez, Lizarazu, Djorkaeff, Dugarry. Simply an amazing squad. On that final versus Brazil, Zidane, who had not scored at all in the tournament, stepped in to initialize the scoreboard and seal the deal with a 2-0 that would later be appended by Petit's goal. Goleada! 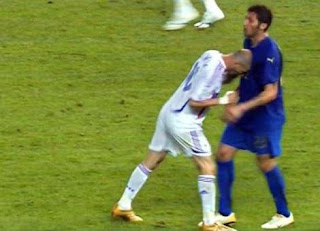 On to 2002 and the pains of being number 1 but relying on one player--Zidane. "Zizou" was injured for the first two matches. France went on to lose their opening match (which I incidentally had called) to Senegal 0-1. Scoreless tie against Uruguay and a 2-0 loss versus Denmark doomed the squad and they bowed out after the first phase.

In 2006, the "old guard" would have its chance once more. After a slow start in a relatively weak group, France squeezed out of the group phase by defeating Togo and with help from Switzerland. The round of 16 pitted them against Spain, heavily favored by many. It was not to be for the Spaniards... 3-1 for the French in an amazing match. Next came Brazil, again, except this time there was no penalties. This time it was Zidane dancing around Ronaldinho and connecting superbly with scintilating Henry. Henry's touch on the 57th minute marked the difference. Portugal, with a young Cristiano Ronaldo, met them in the semifinal. Zidane's penalty early in the match decided the contest. And the final? Still fresh in the memory of, dare I say, American fans. Zidane's header on Materazzi's humanity eclipsed the penalty he had scored early in the match. The legend would be ejected and Trezeguet would miss the penalty that decided the game. Italy won in another installment of antifutbol. 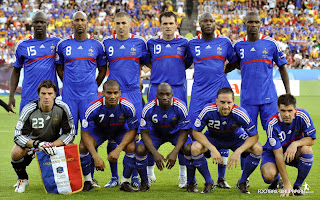 So what's next? They are in 2010 due to FIFA oversights but are here nonetheless. Franck Ribery, for one, rose up during 2006 to become Zidane's apprentice and now sits comfortably in the midfield directing plays left and right. He's joined by Toulalan, Diarra, Diaby, Malouda. Up top are Benzema, Henry, Anelka. Anchoring the back line are Gallas, Evra, Sagna, Abidal. Against them are the hosts, South Africa, along with Uruguay and Mexico. You could pencil them in for the next round but remember that they are a streaky bunch (as 2002 showed). They are in need of a spark at the moment, yes, but they can never be counted out.

You should have just ignored them and written a post about the Irish team :)

Yeah, not this time, bud. Platini and Zidane are special in my futbol memories.

I think the mug of Guinness points the direction of my allegiance.