If you are a futbol fan, then Argentina is always on the top of your list for players, teams, history and superstars. Who can forget Basile, Mario Kempes, Caniggia, Goycochea, Batistuta, Ortega, Sensini, and of course, Maradona?

Argentina is one of the most successful teams in the world, having won 19 different international titles spanning the Copa America (14), Olympic games (2), Confederations Cup (1) and the World Cup (2).

Argentina's World Cup adventures starts with Uruguay 1930, when the host country defeated them in the final to become the first ever champions. The "Albicelestes " have been in 3 other finals since that tournament. It would not be until they hosted the World Cup in 1978 that they reached a final and won the title. They were the hosts and boasted the great Mario Kempes. Argentina '78 was one of the most controversial tournaments (aside from England '66). Argentina needed a win and a lot of goals to get past Peru in order to make the final. Some say that the 6-0 score resulted from bribery.

My memories of Argentina begin, understandably, with 1986. I knew about the "Hand of God" in the Argentina-England game. Clearly one of the best games of all time. Maradona would score once with his hand and once on an incredible run from his own half to beat midfielders, defenders and goalie to score their second of the match. Gary Lineker would score for England. 2-1. Probably the game I remember the most from that tournament (aside from Brazil-France) has to be the final against West Germany. It was Basualdo, Burruchaga, Maradona, Valdano against Brehme, Rummeniege, Voller. After going up on the scoreboard 2-0, Argentina were well on their way to their second title. Germany would come roaring back. Burruchaga's strike in the 83rd would seal their win with a goal that left the goalie lying flat on the ground.. forever imprinted in my mind. 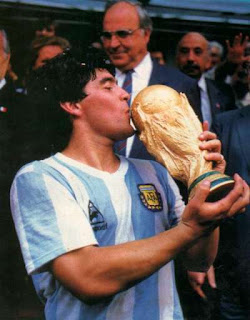 Italia ’90 was different. Argentina were the champions and Maradona was a legend. It would all come crashing down in the first game. It was Cameroon and Oman-Biyik that proved Argentina wasn’t the same from 1986. They would lose to the Africans by 1-0. They would bounce back, however, beating the Soviet Union and tying Romania. They qualified as one of the best 3rd places. Then came Brazil in the round of 16. A South America clasico. Caniggia in the 80th minute that silenced the “Cariocas.” That had to be one of the better games of the tournament. Argentina went on to defeat Yugoslavia in penalties as well as the hosts, Italy, on penalties once more. Goycochea, the Argentina goalie, made the difference. The final, a reprisal of the ’86 final, saw them face Germany. This was a match of special significance for me. I sided with Germany whilst the rest of my family were with Argentina. This was mostly since I was enrolled in a German school. Andreas Brehme, the charismatic defender, sentenced the match in a controversial penalty. Maradona cried as he received the silver medal. Lothar Mathaus rejoiced as he lifted the cup.

In USA ’94, Argentina succumbed to forces outside their control. Maradona, after playing inspired matches versus Greece and Nigeria, test positive for doping and was banned from competition. This marked the beginning of the end of Diego’s career as a player. Argentina would not get past Hagi’s Romania. The score was 3-2.

Fresh from rough years for the national team, Argentina would once again be considered a contender in France ’98. It was Batistuta and Ariel Ortega (regarded as the new Maradona) that would help the team to win their group. In the round of 16, Argentina faced England in a reprisal of the ’86 quarterfinal. At this time, Michael Owen stepped onto the big stage, as did some guy named David Beckham. Alan Shearer and Owen scored for the English whilst Batistuta and Zanetti scored for Argentina. This had to be one of the more entertaining matches in the tournament. Owen’s goal was particularly impressive. Argentina would win on penalties, but Becks’ red card may have played a role. In the quarterfinals it was Denis Bregkamp of the Netherlands that exacted revenge for the 1978 final. Argentina was bounced from the tournament. 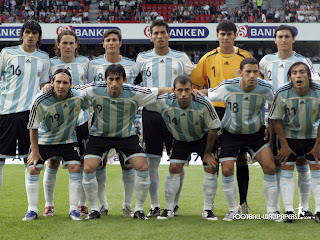 In Korea-Japan 2002, Argentina landed in the group of death. They faced England, Sweden and Nigeria. After defeating the Nigerians, the “gauchos” would lose to England thanks to a Beckham free kick in a match worth remembering for the England international. Batistuta and Crespo couldn’t do enough against Sweden and they were sent home after the group stage. 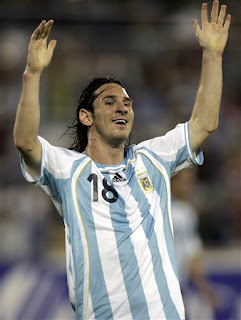 During the last World Cup in Germany, Argentina once again emerged as favorites. They were once again in the group of death, except this time they came out victorious. Their rivals were Serbia, Ivory Coast and the Netherlands. They would tie Netherlands and win the other games. In the round of 16, it was a familiar rival, Mexico, that stood in their way. The Mexicans were playing impressive soccer and went up on the scoreboard 1-0 thanks to a Rafa Marquez goal. Argentina would tie it up right away thanks to a Hernan Crespo goal. Maxi Rodriguez’s goal in overtime saw them qualify for the quarterfinals. It was now Germany, the host team, that ultimately defeated the Argentines in penalty kicks after Cambiasso and Ayala failed to score. Some blame Peckerman’s refusal to start a much younger Messi in the games.

In 2010, it will be MaraMessi or MessiDona that may be the difference. They have an “easy” group comprised of Nigeria, Greece and Korea.