Big Love: from Terry to Harkes 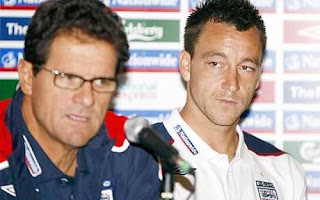 Who says there's no drama in soccer? And what about love and infidelity? Maybe some "Dream Team" action too? Yes, from England to the USA. Just recently, John Terry of Chelsea and the England national team has been sacked as captain of the England squad. Why? Extracurricular activities with Vanessa Perroncel, the former girlfriend of England defender Wayne Bridge. Ouch indeed. Should he be removed as captain? Yes, if it will cause turmoil within the team that will also cause distractions prior and during the World Cup.

Would England blame bad form in south Africa to Terry's affair? Probably. It happened before. Here, in the USA. Do you remember back to 1998 when Steve Sampson decided not to include John Harkes (captain at the time) in the US squad for the tournament? Apparently, this is what caused the three and out for the US. But why? An extra-marital affair with the wife of none-other than Eric Wynalda. Drama! 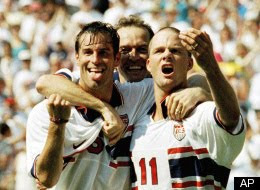 Now, I won't get into details but know this: according to Sampson and Wynalda, this caused enough of a rift to undermine the team's performance, thus leading to losses against Yugoslavia, Germany and even Iran. What a disappointment. I'm not sure this is necessarily true. Sampson wasn't ready for the tournament and the US needed a foreign coach to ride the psychological high from 1994. Scapegoating is just too easy in world football, and Terry's and Harkes' dilemmas are further proof. But, if England is distracted, this may actually help the US, direct rivals in the group phase. If so, American fans should cheer on the current events. Soccer analysts, both official and unofficial, will just be disappointed... but players are human beings, we must remember that.
Posted by R. Mera Velásquez at 11:33 AM

Did Harkes and Wynalda work for ESPN at the same time? That must have been uncomfortable if so...I don't know if the internal discord caused the three and out, but the loss of the team's best midfielder couldn't have helped.

Exactly my thinking. I think Harkes is a newer addition to ESPN and Wynalda didn't last long because he's always exceedingly controversial. A couple of years ago this sure could haven been the case.