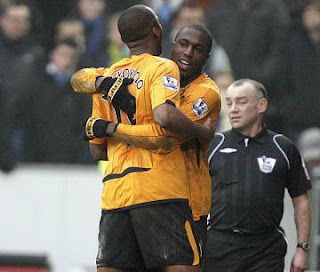 Perhaps it was only fitting that after all the criticism, personal afflictions, and group play in his team. Jozy Altidore finally scores in the English Premier League after playing for Hull City in 18 games. It is a result that brings confidence to his game, relief for US soccer fans, and perhaps more importantly, temporary safety for Hull as it climbs out of the relegation zone.

The past few months have been a rollercoaster for the 20-year-old. From no participation whilst on loan to Xerez of Spain during the spring season, to a hat trick versus Trinidad and Tobago in World Cup qualifying, to a stellar performance in the Confederations Cup, to the announcement of his loan to Hull, to tragedies with Charlie Davies and his ancestral home-Haiti. Indeed, enough events for a young man like himself.

Altidore last scored for Hull during his second-ever match for the team in Carling Cup play against Wycombe Wanderers in August 2009. He has been a hard-working forward, however, winning balls, setting up goals and winning free kicks and penalties. The press hasn't wasted time acknowledging him, though. Perhaps it's time for impatient US soccer fans to let the man breathe and play his game. He is a star player, and he proved it yesterday.