US squeaks, Mexico rolls in friendlies 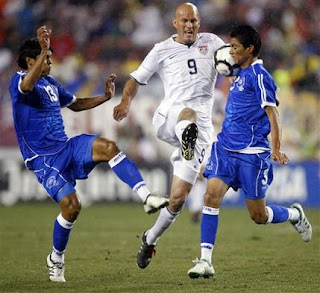 International friendlies during non-FIFA dates are a way to diagnose how domestic-based players stack up compared to those playing in Europe's elite leagues (and other countries as well). These games are usually reserved for non-European teams and/or mid to low level Europeans. Why is this so? Big leagues, big teams, big players. The clubs have priorities and do not release their players for non-FIFA dates. This is why Mexico can't call on Guardado or why the US can't call on Donovan or Altidore.

For teams like the US and Mexico, as well as, recently, even Argentina, domestic leagues cede their players to the national team as a way to support national team success and/or to comply with ordinances from the country's federation. For the US, MLS is not in season at the moment and players are free to engage in national team camps. Even some Scandinavian-based players like Clarence Goodson are allowed to partake in non-FIFA dates since their leagues are on winter breaks.

In the end, it's about gaging prospects within the domestic league that may compete for spot with more prominent Europe-based players. Bornstein, Ching and Casey are probable picks for the final 23. But rest assured that the majority of the squad will be comprised of Dempsey, Altidore, Bocanegra, Howard and other international stars. These unofficial friendlies become crucial for at-the-moment fringe players like Kljestan, Findley, Pearce, Beckerman. We might say that they haven't done as well as they could have. Their first friendly versus Honduras was horrendous due to an early red card. Yesterday's match against El Salvador was a great deal more promising but we are left wondering if our base players are very shallow in scale and confined to Europe.

Granted, Kljestan, Pearce, and Ching showed signs yesterday that they can compete at a higher level and are worth keeping as potential supersubs at the World Cup. A 2-1 win is a win, especially given their shot-on-goal ratio versus their counterparts (something like 4 to 1 with 15+ shots for the US). A lack of the finishing tough is what was missing, something we cannot afford in South Africa. Mexico, on the other hand, ruled the day and completed a thourough routing, 5-0, of Bolivia. Players like Hernandez, Blanco and the veteran Braulio Luna emerged as potential competitors for the Europe-based players like Vela, Osorio and Guardado. Mexico showed how a friendly match on home turf (it's San Francisco, people) should be won when the competing squad is also comprised of domestic-based players.

All in all, it was a promising start. Now it's time for the international stars to affirm their status as first-teamers... and the chance comes against Holland in Amsterdam (Wed, March 3 on ESPN2). Good luck.
Posted by R. Mera Velásquez at 11:29 AM

That will be a challenging match. Have we ever beaten the Dutch?

last played and lost to them in 04...0-1
two or three other times... always lost to them.
check this out: http://homepages.sover.net/~spectrum/usamen2.html