Adu scores his first for Aris of Greece 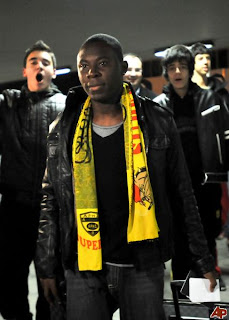 Freddy Adu, once branded as the American Pele, scored his first competitive club goal today in over a year. Maybe it was coming all along. Maybe we wrote him off too early. Could he make the World Cup team? Not so fast. Not yet.

Adu first signed with MLS at the tender age of 14 and played for DCU under Peter Nowak. He was never as dominant as expected and scored 11 goals in 87 games. A brief stint at Real Salt lake followed before he moved to Benfica of Portugal on a free transfer in 2007. Whilst at the Portuguese team, Adu scored twice but quickly fell out of favor. He would appear only 11 times for Benfica. Next came an unsuccessful loan to Monaco of Ligue 1 during the 2008-2009 season. He only made 9 appearances. For the 2009 fall semester, Adu was loaned to Belenenses of Portugal. He played in only 4 games.

Many in the US soccer media thought that Adu was on his way out of Europe and back to MLS. Then came news that Aris Thessaloniki FC of Greece would snatch him up on loan along with Eddie Johnson of Fulham. This was his last chance, many though. Maybe he can start silencing his critics now... but let's not jump to conclusions. If, however, he continues to dominate, he may sneak his way into the national team, especially if injuries continue to strike top players like Edu, Dempsey, Torres.