Ever since Italia '90, Africa has had a special place in my futbol heart. It was a win by Cameroon versus Argentina on opening day that changed everything. Then came Nigeria in 1994, ready to build on Cameroon's improbable run to quarterfinals four years before. Nigeria played wonderful soccer and did not disappoint, even if they couldn't make it past the round of 16.

It certainly all starts with 1994, but Nigeria always had football in their hearts. Their first "competitive" match came while still an English colony in 1949. They would not see much success until the 1980s as more of their players joined European clubs. This was limited to one AFC Cup of Nations in 1980 and a couple of finals in '84 and '88, where they lost to Cameroon. Their junior team, U-23s, won the gold medal in Atlanta '96, reafirming Africa's place in world football royalty. Kanu, presently still with the team, captained the team. 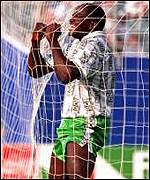 Nigeria made their first World Cup appearance in USA '94 and opened the tournament against Hristo Stoichkov's Bulgaria. They impressed, much as Cameroon had in Italy four years before, by defeating Bulgaria 3-0, then facing Argentina in a hard-fought loss (1-2), before ending their group phase with a 2-0 victory versus Greece. It was Yekini's goal celebration versus Bulgaria that became the trademark of African soccer in 1994. Nigeria's next game came against Italy. They were winning for most of the game until Baggio tied it up in regulation time before with a penalty before securing the Azzurri's victory with another spot kick in overtime.

Looking to build on their impressive, albeit short, participation in 1994, Nigeria entered France '98 with certain optimism. They would not disappoint. Easily the most memorable game from that tournament came when the "Super Eagles" faced Spain in their first game. A final 3-2 score after coming back twice from being a goal down sentenced Spain's chances of advancing through to the round of 16. They would win against Bulgaria once more but would lose to Paraguay in the last game of group play. An unfortunate 1-4 loss to Denmark followed and they exited the tournament after the second round. 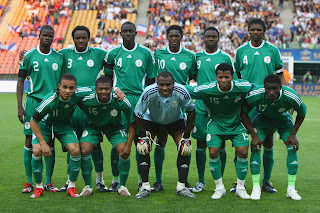 After two impressive World Cups, Nigeria was prepared for a third when they were placed in the group of death: Argentina, Holland, and England. They would salvage only a tie versus England in the last game. Losses to Argentina and Holland in hard-fought matches weren't enough.

Next for Nigeria is a more accessible group that includes 2004 Euro champs Greece, mighty Argentina, and always-difficult South Korea. Veteran Kanu seeks to erase past memories with a good outing. Mikel Obi of Chelsea and Obafemi Martins of Wolfsburg are headliners, as is Yobo from Everton. This is a highly-contested World Cup group, but advantage is in Nigeria's side based on some of their more prominent players.