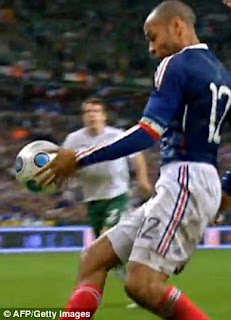 La main de Dieu. La mano de Dios. The hand of God. Not Maradona. Thierry Henry. Easily one of my favorite players, but even they can fall from grace. And so he did. Kind of. At least in Ireland and most places that don't fancy the French and/or their national team. He handled it, no doubt. He probably thought he would get called on it, yes. In the end it wasn't really his fault. It wasn't the referees'. It was the game.

For some time now, maybe 40 years, there have been calls for video playback to be included in the officiating of matches. FIFA was slow to act and simply never did it. It would be useful for handballs, dives, goal-line decisions and other important calls that might change the result of a game. True, it might hamper the flow of the game. True, it might lengthen the game. But how long are we going to watch travesties such as today's to continue when we have the technology to circumvent this problem?

I propose this: With NFL rules as a start, why not allow two "challenges" to each team that can be reviewed by the officiating crew? This way it will only be a limited amount of calls, adding potentially another 4 minutes to each game.

But now it's just the result that matters. France are back in the World Cup, and with it the millions of dollars in sponsorship deals and media contract. Out is Ireland. A country proud of its sport, whose warriors on the field were handed an unfair result. But that's football.