Collapse: US falls to Denmark in friendly 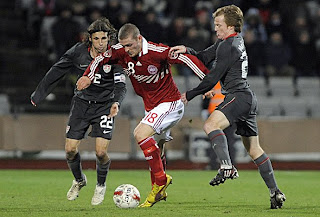 What do we make of this? Clearly, Donovan's presence is key to the US attack and drive as a whole. Onyewu's absence in the back line was flagrantly obvious, along with Bocanegra's mishaps. DeMerrit, Goodson, Marshall and Conrad are all good options, with DeMerrit being at the top of the list. Unfortunately, Goodson-Conrad, Bocanegra-Spector did not work today. Spector was miserable as a center back, even though he is occasionally played there in his club team, West Ham.

On the flanks, Bornstein had a quiet day but let a few balls slip through. Hejduk was a trooper and played with his trademark spunk, but Cherundolo and Spector remain better options at that position. Castillo was not used as a left back, from what I could tell and failed to impress.

The attack was quiet with a seemingly out-of-shape Altidore and with Cunningham and later Johnson lacking enough service to be dangerous. This was ultimately the problem... The midfield. Holden was exceedingly out-of-pace with the rest of the game, Bradley was caught ball-watching and Clark didn't contribute enough defensively. This was the major cause for the collapse at the start of the second half with three unanswered Danish goals. The defense needed more numbers in the back and the defensive midfielders were caught ball-watching.

Some positives include Feilhaber's resilience and Cunningham's opportunistic chance. I'm not sure if Castillo will be called up again, maybe for another friendly, maybe not. Donovan and Dempsey are clearly the aces in this team. It's hard to see the US faring well without them. Another point is Altidore's companion up top. Davies' speed is missing right now and the only other dominant player that can do this is Donovan. But who would be the creative force without Donovan in the midfield? These are questions that need to be mauled over by the coaching staff and the players themselves. There's not much time left until the World Cup and there are only a handful of FIFA dates to work with next year ahead of the competition. Indeed, it's crunch time.

If Cunningham has the speed he may be the best option I have seen to replace Davies, he certainly showed a nice finishing touch today and it certainly was not his or Jozy's fault that the midfield was so miserable.