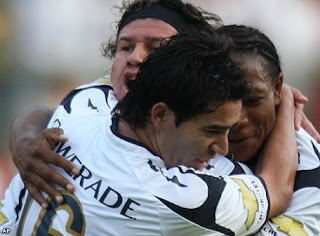 El idolo del Ecuador. That was Barcelona of Guayaquil. Might it still be? With me being away from my home country for 19 years, it's hard to say. With recent events, however, it's tough to argue with the fact that Liga Deportiva Universitaria de Quito is the best club team Ecuador has ever produced. We measure this not just in the domestic league (9 titles, behind Nacional, Barcelona, Emelec), but on an international level. Liga won the Copa Libertadores last year, was a finalist in the Club World Cup against Manchester United, and won the Recopa (match between Libertadores and Sudamericana winners).

Today was another high point for the Quito team. They won with an amazing score of 7-0 against Uruguay's River Plate in the 2009 Sudamericana semifinal. This means they advance to yet another international final against Fluminense of Brazil (curiously, the same team they faced in last year's Libertadores final). That's four finals over the course of two years. Truly a noteworthy accomplishment.

As much as it may pain me as a native of Guayaquil and a hardcore fan of Emelec, I must admit to this: Why shouldn't Liga be the new idol? The little kids in the country without a team of their own need only watch television to assert their allegiance. This is a team that boasts former Ecuador internationals De la Cruz, Reasco and Edison Mendez. What young Ecuadorian footballer doesn't want to play alongside them?

Enjoy the highlights of this record-breaking game:

I attended the game in Quito last week between Liga and the Brazilian team, which Liga won 5 - 1 (the Copa Final Sudamericana). WOW... what an incredible game! After the Brazilian team scored within the first minute of play, I was concerned; however, the Ecuadorians then simply "took the game over" and scored 5 unanswered goals. It was incredible!!! It's as if they "spotted them a goal". After that first goal, the Brazilian team barely had any more chances to score. The entire game was played in the Brazilian zone with Liga U on the assault!

As a lifelong resident of the USA and college (Ohio State University) football fan, I thought that I had seen enthusiastic fans; however, the Ecuadorian fans are INCREDIBLE!!!!! I was in "general admission" behind the north goal. It was NUTS! I have a whole new appreciation for soccer (futbol) and am now a Liga fan for life (although the loyalties of my wife's family, who are Ecuadorian, are split between the two clubs from Quito... they had some passionate disagreements about the two teams!).

This a prank or a joke? How can a team with the least amount of fans be the idol of Ecuador. Lduq is the 5th of amount of fans.
1. El Idolo del Ecuador
2. Emelec
3. Aucas (idolo quiteño)
4. El nacional
5. Lduq

A team that has the most amount of fans is called IDOLO DEL ECUADOR and that team will always be Barcelona Sporting Club!!!