In & out: the November World Cup playoffs 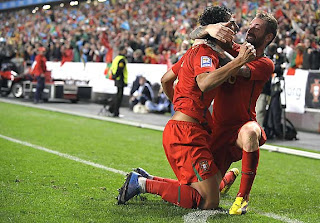 Yesterday I had the pleasure of experiencing a full world cup qualifying day with a great Bosnian friend of mine. Our prerogative was, of course, the playoff between Bosnia and Portugal played at the Stadium of Light in Lisbon. The home team came away with a victory of 1-0 in a game that could easily have gone Bosnia's way with three (yes, three) shots hitting the post. Dzeko was a threat in the area but Bosnia's chances came only in spurts as the hosts put continuous pressure on the visiting team. Return leg is on Wednesday at Zenica in Bosnia. An upset by the Balkan team could effectively push Cristiano Ronaldo's team out of South Africa. That would add another superstar's absence from to next year's tournament after Ibrahimovic's Sweden was eliminated.

Elsewhere in football yesterday was France's win in Ireland thanks to a Nicolas Anelka goal in Dublin. The bleus are now one foot away from South Africa. It was a scorcher between Russia and Slovenia. Russia deserved more, but Slovenia got an away goal late in the game that will prove crucial during Wednesday's return match in the former Yugoslav republic. Arshavin and Pavlichenko's play, along with Bilyaletdinov's brilliant strikes highlighted a young Russian side with great prospects for the future... if they are able to advance after Wednesday's game. Ukraine and Greece tied 0-0 in Athens. Donetsk will be a tough, cold venue for the Greeks in the return leg.

But the playoffs in Europe weren't the only qualifiers yesterday. Egypt forced a playoff in neutral ground against Algeria after a 95th minute goal earned them a 2-0 victory that tied their North African neighbors in points and goal differential. Nigeria and Cameroon also returned to the World Cup after their absence in 2006. Oceania finally has a team other than Australia (now in the AFC) earning a spot in the World Cup after New Zealand posted a 1-0 victory over AFC's Bahrain. Finally, another inter-conference playoff between Concacaf and Conmebol ended in a 1-0 victory for Uruguay in Costa Rican soil. The two-time world champs are now poised for another appearance in FIFA's most important tournament. 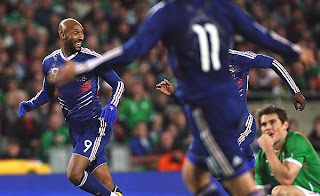 The fun doesn't stop there. Because this was an official FIFA date (meaning all club teams are required to cede their players for international matchups), high profile friendlies could be played. A depleted England fell to Brazil in Quatar whilst Spain beat out Maradona's Argentina. The US also had a friendly in Bratislava against a limited Slovakia side that was content with a 1-0 margin attained through a questionable penalty. Cunningham and Dax McCarty made the squad but didn't factor much. Wednesday brings a more intriguing game against Denmark on Danish soil. Edgar Castillo will feature for the Americans, as will Torres, Holden and Clark. Dempsey, Cherundolo, and Marshall have been released from camp.

Wednesday should be another great day for international futbol. Much is still at stake and all will be resolved ahead of next month's World Cup draw.
Posted by R. Mera Velásquez at 11:36 AM

Looking forward to watching some games tomorrow! Was the Bosnian friend Mirza or are you cheating on him with another Bosnian?

Yep, it was Mirza.