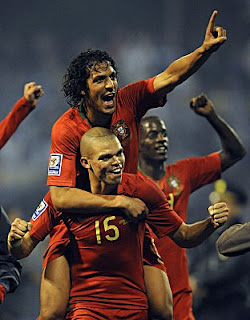 Vive la France. Vive les Bleus. France are in after Henry "handed" them a victory thanks to his pass for William Gallas. It's tough to argue that significant dividends will come from the French's inclusion in next year's tournament. Add Anelka, Benzema, Henry and Malouda and you start to see the economic impact. This also sets up another possibility for Brazil to not win the tournament. For the past six World Cups, only France and Argentina have been able to knock off the "verdeamarela." France-Brazil in quarterfinals of Mexico '86 and Argentina-Brazil in the round of 16 in Italia '90 are some of my best memories.

Another economic success is Portugal's entry into the tournament. Cristiano Ronaldo will be in the World Cup after all. After a poor showing at home versus Bosnia in a match that the Bosnians deserved to win (3 hits on the post), the Balkan team collapsed at home due to player suspensions and saw their chances of advancing come to an end on a sad night in Zenica. Portugal won without CR9 by the minimal score away from home. 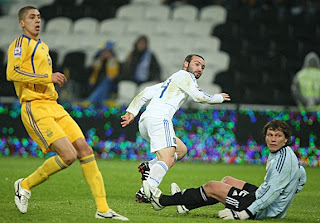 Welcome back, Greece, Slovenia, Uruguay, Algeria. Greece, the unlikely Euro chanps in 2004, enter their second World Cup since their debut in 1994. This a stronger Greek team full of defensive potential. They are the new Italy of defensive football. Out is Shevchenko's Ukraine, which failed to win in Donetsk. Slovenia also managed to knock off another former Soviet republic--Russia. Guus Hiddink failed to qualify a young and promising Russian team that had raised a few eyebrows during the last three years.

Uruguay are back thanks to a playoff versus relatively weak Costa Rica. The team is loaded with attacking talent in Bueno and Forlan. Then there is Algeria, appearing in its first World Cup since 1986. They are a country rich in soccer history (Zidane's family is from Algeria). They battled against Egypt on neutral soil in Sudan after tying in every statistic in their respective African group. The match was a gut-wrenching 90+ minutes full of joy and sorrow. I caught the Egyptian-based signal and it was sad to hear the tones of voice emanating from the announcers even though I couldn't understand a word they said. 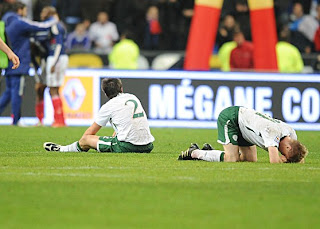 The next phase is Friday, December 4th in Cape Town (ESPN2 at noon), where the draw will take place that will decide the groups for the initial stage in next summer's tournament. Who will be in the "group of death"? Who will have an easy "group of life"? What group will the USA land in? It will be a fun couple of hours .
Posted by R. Mera Velásquez at 10:35 AM

I am pretty excited about watching Greece. Of course, I also like watching paint dry and grass grow so maybe I am in the minority regarding their exciting level of play. Maybe they will be in Italy's group, what a dream matchup, 90 minutes of zzzzzzzzzzzzzzzzzzzzzzzzzzzz

It was a sad day for Bosniaks! Its a new team and they will have 4 more years to get ready.