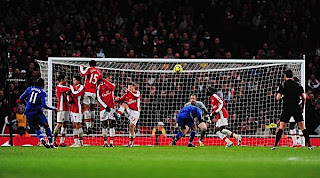 It is always such a treat to watch the most expensive, most coached, most watched, and most controversial teams play each other. Such was the case with the Barcelona - Real Madrid SuperClasico and the Arsenal-Chelsea London derby. Both games delivered and were worth the millions spent on the teams (not endorsing such exorbitant prices, by the way).

For Arsenal it was perhaps the lack of Van Persie and Adebayor, or just that Ancelotti clearly outmanaged Arsene "Voyeur" Wenger. Or maybe it's because Chelsea is just that good this year. When you realize that the same group of players have basically been marinating in their own collective talents (Lampard, Ballack, Drogba, Deco, Anelka, Terry, the Coles) you have to admit something special could come to fruition. The Drogba-Anelka tandem alone strikes fear into opponents, especially now that they are starting to gel. Drogba, needless to say, is pure magic, and both goals against Arsenal attest to this notion. 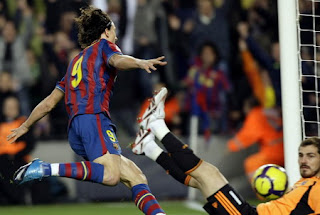 In the city of Barcelona, home of the soccer team bearing the city's name, a clash of titans occurred today. It was the "merengues" Real Madrid visiting Guardiola's champions. It was Raul - C. Ronaldo versus Ibrahimovic - Messi. It was Iniesta - Xavi versus Xabi Alonso - Kaka. It was a slow game at times with plenty of defense, but Ibrahimovic needed only one shot on goal. It is the Swede's positioning, opportunism, and clarity in finishing that makes he and this Barca team so dangerous to stellar defenders like Arbeloa, Sergio Ramos and Pepe. Perhaps Real Madrid would wow us with every move if it weren't such a makeshift team put together with a dream of winning everything, but instead coalesced established players around a quality nucleus at midfield (like Barcelona and Chelsea). But, who are we to dismiss any of these teams? They make us cheer, scratch our heads, and appreciate the king of all sports--soccer.