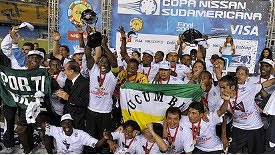 Yesterday, Liga de Quito proved why it belongs with the top teams in South America. They went to the mythical Maracana stadium in Rio de Janeiro and they won the Copa Sudamericana. It was Edison Mendez, Ulises de la Cruz, Neicer Reasco against an experienced and dangerous Brazilian team--Fluminense. If it sounds familiar it's because Liga topped the same team in June of 2008 in the Copa Libertadores. It is another high point in Ecuador futbol.

Club allegiances aside (I favor Emelec of Guayaquil), we must note the incredible progress that Ecuadorian soccer has made in the past two decades. Before, Ecuadorians were happy with a 0-0 tie against Brazil in the Copa America. Nowadays, making it to the second round of the World Cup is what they expect... not making it at all to the tournament is a failure. Club teams were the same. For years, Barcelona of Guayaquil and Emelec were content with making it to the semifinals or the final of the Libertadores only to lose to a Brazilian, Paraguayan, or Argentinian team. This is no longer the case.

Liga's success is reflected in Ecuador soccer because Liga has to fight other teams within the country to get through to play international games... and they often lose to Emelec, Nacional, Deportivo Cuenca. We also acknowledge their resilience, their ability to hold the ball, their Casa Blanca, and their fans. At home they are invincible (like Ecuador in the 2006 qualifiers)... and they win with authority. The first leg of the final produced a 5-1 win, whilst the home leg of the semifinal was a resounding 7-0 victory over River Plate of Uruguay.

Liga pulls it off. They win the games they have to win. They get the results away from home that they need to get. A bit of luck is always present in sports royalty... but we can't deny them their place at the top. Three consecutive international titles is no fluke. Players like Claudio Bieler, Espindola and Franklin Salas are world class. Their repatriation of Ecuador legionnaires Mendez (PSV Eindhoven), Reasco (Sao Paulo), de la Cruz (Aston Villa) is a credit to their management. Yes, they are a world class team, and they belong at the top.
Posted by R. Mera Velásquez at 11:06 AM