Mexico has a rich history in world football. They hosted two World Cups: 1970 and 1986. They advanced through to the quarterfinals in both tournaments. Mexico won a FIFA Confederations Cup, five CONCACAF Gold Cups, three CONCACAF Championships, one North American Nations Cup and two NAFC Championships. Additionally, Mexico has also participated in the CONMEBOL Copa América since Ecuador 1993, finishing as runner-up twice and obtaining the third place medal on three occasions.

Besides having Mexico '86 being the first World Cup I remember, Mexico is one of those teams that I have continuously followed throughout my young life as a soccer fan. In 1986, I remember that Germany faced and defeated them in the quarterfinals en route to the final versus Argentina. They (Mexico) lost that game on penalties. It was a heartbreak for a proud soccer nation. 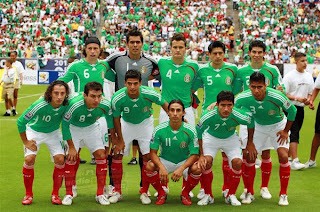 On to the 1990s. The team was absent in 1990 due to a suspension after using players over the age limit allowed by FIFA in the qualifying round for the Olympic Games in Seoul 1988. In 1994, they returned to the world stage and won the "group of death" that included Norway, Italy and Ireland. Those were the days of Jorge "el Brody" Campos on goal with his exceedingly colorful goalkeeper kits. Mostly, though, I remember Hristo Stoichkov's quick strike against Campos (his hands failing to make good contact with the ball.

On to 1998. Not many memories here of the Mexicans... except for the fact that, after a good first round in which they qualified second but with equal points as Holland, they once again faced Germany. The paternity continued and the Germans ousted the Aztecs once more. 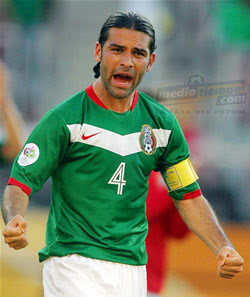 Now comes the fun part: 2002. This tournament had both Ecuador (my birthplace) and the US (my home) and I followed both teams very closely. Ecuador was participating in the event for the first time in its history. The US was looking to make amends for a disastrous 1998. The tournament was in a neutral location in Asia. It would be Mexico's time to shine. After a 1-0 victory over always-difficult Croatia, they headed for a game against newbies Ecuador. Agustin Delgado's goal for the Ecuadoreans early in the first half was only temporary. Mexico would dominate the game and eventually would win it by 2-1. They would then go on to tie Italy 1-1 with a wonder goal from Jared Borgetti. Mexico was riding high once more, having won its group, and went on to face a familiar foe in the round of 16: USA. This was a defining moment for the US national team, as they went on to defeat the Aztecs 2-0, and one of the hardest defeats for Mexico. The score still hurts up to this day. "Dos a cero" is a phrase they won't soon forget.

Mexico once again qualified for the World Cup in 2006. They were one of the eight seeded teams for this tournament due to their previous achievements in the Confederations Cup and the Copa America. They faced Angola, Iran and Portugal. Iran was the easier of the three foes and the Mexicans went on to defeat them 3-1. They subsequently tied Angola and lost to Portugal but still made it to the second round. Here, after a hard-fought 90 minute battle against always-favorite Argentina, Maxi Rodrigez struck a perfect volley in extra time to hand Argentina the victory.

Mexico has a wealth of stars playing abroad and in the domestic league. Some include Rafa Marquez of Barcelona, Vela of Arsenal, Guardado of Deportivo, Salcido of PSV. Their group matchup against hosts South Africa, Uruguay and France may seem like one of the lighter groups with plenty of chances for them to sneak into the second round. Never underestimate the hosts or former champs Uruguay and France. This is an exciting group and the Mexicans will be one of the favorites as giants of the world football scene.

Borgetti's goal. Easily one of my favorites of all time:

Having read this I thought it was very enlightening.

I appreciate you taking the time and effort to put this informative
article together. I once again find myself personally spending way
too much time both reading and leaving comments.
But so what, it was still worthwhile!