La Celeste. Enough said. Yes, these days Concacaf teams were hoping to land this South American team in their group. Yes, they haven't made much noise since 1970. But still, they were the original World Cup champions in 1930 against Argentina. They are also the only ones to win a major tournament in Brazil. That was 1950, the first World Cup after World War II and the final was in Rio de Janeiro at the famed Maracana stadium. It ended 2-1 in favor of the Uruguayans, silencing a football nation that would have to wait another 8 years before its first title. Added to two World Cups are 14 Copa America titles and a 4th place in 1997 Confederations Cup. They last won a major tournament in 1995, which they hosted and won on penalty kicks against Brazil. 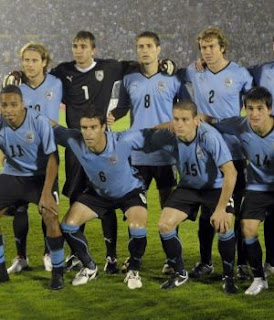 Outside of its constant battles versus Brazil and Argentina in games that are usually "clasicos," Uruguayan football is much more about harsh defensive tactics and clogging of the midfield. Their club teams include Penarol, Nacional, River Plate (the other one), among others. The "Charruas" these days are in the constant mix of mid-table South American teams. If it had not been for a miraculous penalty in Quito, it may be Ecuador or Costa Rica we are talking about here.

Uruguay participated in Mexico '86 but I only remember that they were there and not much else. The team lost to Denmark in the group stage and tied both Scotland and eventual-finalists Germany. A date with eventual-champions Argentina ended their run. I remember them in Italia '90 when Fonseca and Bengoechea were playing. Then there's the Uruguayan master... Enzo Francescoli. For that World Cup, I had a booklet that included all the players for all the teams and Uruguay happened to have some legible names for a then-11-year-old. On that World Cup, they squeezed into the round of 16 as 3rd place simply because at that point wins still counted for only 2 points (instead of 3 today). Their group included Spain (group winners), Belgium and South Korea. They tied Spain, lost to Belgium and won against the Koreans. Hosts Italy were too much in the round of 16; they lost 2-0. 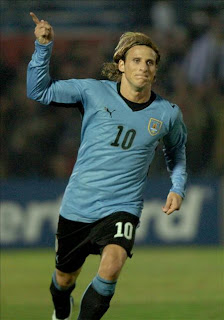 Uruguay would go on to to miss both USA '94 and France '98. They would make a comeback in 2002 after winning the playoff against OFC's Australia (incidentally, they lost this match for the 2006 tournament). Uruguay landed in the group of death: Senegal, France and Denmark. Although Senegal were newcomers, they exploded onto the scene with their shock-win against then-champions France. They would actually go on to tie the Senegalese and also France, forcing a must-win for the defending champions on their last match. The game against the Danes was fantastic (this was their opening match) but their game versus Senegal was a hard-fought 3-3 battle that nearly ended the African team's chances of reaching the ground of 16. Very cool goal by Forlan.

In 2010 they are in the group with Mexico, South Africa and once again with France. There's no surprise team unless South Africa realizes they must win as hosts. Mexico and France are known foes. Uruguay boasts Diego Forlan of Atletico Madrid along with Sebastian Abreu of Botafogo, Eguren and Godin of Villarreal, Caceres of Juventus, Luis Suarez of Ajax and Diego Lugano of Fenerbahce. It's a wealth of talent and a credit to being in the tournament. Most of their players play abroad and are well-known throughout the world. I can see them sneaking into the round of 16 if Mexico doesn't deliver or even if France crashes out early once more.

I leave you with goals from the 2002 game with Senegal. Enjoy.

Excited to see Landon make his debut with Everton today. I knew I picked them as my favorite side in the Premier League for a reason.

Too bad the game wasn't on TV. He had an assist with the first goal.

Yea you'd think they would have had it since all the others got snowed out. I think I got like 5 points on my fantasy team. Barf.