US vs Honduras: Bad start in a World Cup year 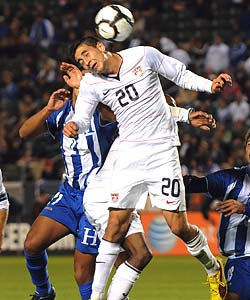 Yes, those were not the starters. Yes, there was an ejection 17 minutes into the game that also led to Honduras' first goal. No, this isn't how World Cup preparation starts, not at home and certainly not against a "weaker" foe. Let's not forget that this group of players has been training for almost three weeks.

So what does this 1-3 loss mean? For one, it's our defense. If last summer during the Gold Cup we fielded reserve players that fell apart in the final match against Mexico (0-5, by the way) then last night we saw just how shallow our group of players is. Of all defenders on the pitch yesterday, only Goodson showed he could play in the World Cup. Conrad failed horribly early in the game and was rightfully ejected. Marshall looked weak in the central defense and didn't make a case for himself. Bornstein once again disappeared and continued his tendency for streaky game.

Of the midfield only Feilhaber can be considered a potential starter or sub in South Africa. But still, Rogers and Kljestan are possible selections by Bob Bradley as substitutes. Beckerman once again failed to make an impression. Up top, Robbie Findley looked lonely following Conrad's ejection. Casey couldn't do much when subbed in.

Let's remember who isn't playing: Holden, Donovan, Dempsey, Howard, Bocanegra, Onyewu, DeMerrit, Jozy, Davies, Clark, Beasley, Edu. Also, let's remember who may not be in full capacity for the tournament: Davies, Onyewu, Dempsey. Davies could be replaced by Donovan or Dempsey up top, but if those players remain in the midfield, our chances drop to Casey, Cunningham, Findley, Pontius(?). Dempsey is tough to replace since he brings flashes of glory (3 goals in the Confederations Cup, two game-clinchers). Still, Holden or Beasley (if in form) may be able to cover for him. Onyewu's absence is a bit more dangerous. The AC Milan central defender is a key figure with Bocanegra and right now only DeMerrit may be able to cover for him.

And what about Jermaine Jones? He's still injured, but if injuries continue to plague the national team, then his chances may be rising. At this point, if Adu and Eddie Johnson do a good job in Greece, we could start counting on them in the 23-man squad.

Last night was a rough start. A rocky beginning for a make-or-break year in US Soccer. Let's see if the team is able to rebound from this game against El Salvador in Tampa next month (again with all-MLS players). And then, let's hope our first team (with European players) can do a good job versus Holland in Amsterdam on March 3.
Posted by R. Mera Velásquez at 10:34 AM

Although the year may be make or break for the guys in getting towards the end of their careers, US soccer is by no means finished regardless of the World Cup result. Like you say, there is a long time until we know exactly what the roster will look like.