Beasley is back in form 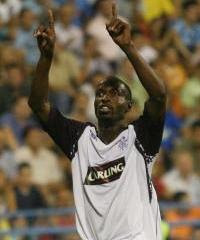 And he's back! Sort of. He has started in 4 consecutive matches for Rangers, adding three assists and a wonder goal against Dundee. Was he ever gone? Yes, in the minds of many (including my own). It started with a bad string of World Cup qualifying games that included the 1-3 thrashing in Costa Rica followed by a horrid showing at the 2009 Confederations Cup in South Africa. In the US' second game against Brazil, Beasley had an unfortunate miscue that led to a loose ball and an eventual goal by none other than Robinho.

Injuries have taken their toll on the speedy winger. Perhaps Scotland, full of imposing figures and physical matches, was not a good fit for him. Still, he was instrumental in Rangers' Champions League campaign in 2007 after being signed on from PSV Eindhoven. He scored 2 goals for Rangers prior to today's match. It is believed that Rangers is showcasing him for potential buyers during the winter transfer window.

Beasley played well during his time in the Dutch Eridivisie, notching an impressive 10 goals in 56 matches and has scored more goals in Europe's highest club competition, the UEFA Champions League than any other American player with a total of six for PSV (4) and Rangers (2). Even during his loan spell at Manchester City in the 2006-07 season, he managed to score three goals in 18 matches.

In MLS, he played for Chicago during the formative years of the league in the early 2000s. For the USA, Beasley has scored 17 times (two of which I saw at the qualifier versus Cuba October 2008). He set up the USA's only goal in 2006, scored by Clint Dempsey against Ghana.

What does the future hold for him? For one, Bob Bradley would be pleased to see him being used on the right flank so effectively. His addition to the squad, given a resurgence in form internationally, would be to free up either Donovan or Dempsey so that they can slide into the forward position. This would temporarily alleviate Charlie Davies' absence. We probably are unlikely to ever see him at left back again, and he may still be a long way from being a starter at the World Cup, but June 2010 is still six months away and anything can happen.

His goal against Dundee:

That would be great considering how poor our midfield has looked in the last few contests I have seen the US play.