Landon Donovan is the prodigal son of a golden generation in US soccer. He came up the ranks, having grown up through the system in the U-17 and U-20 teams, winning the Golden Ball at the 1999 U-17 championship in which the US reached the semifinals. He also scored the second goal in the 2002 World Cup round of 16 versus Mexico that propelled the US to their best finish at a FIFA tournament since 1950.

Donovan is part of a "golden generation" that also includes Tim Howard, DaMarcus Beasley and Oguchi Onyewu. He had a rough start with Bayer Leverkusen of the Bundesliga in 2001 and after the 2002 World Cup and was loaned to the then-Earthquakes of San Jose for three years. He helped the Quakes win the 2001 and 2003 MLS cups. A subsequent transfer to LA Galaxy in 2005 translated into automatic success when the LA team won the MLS cup on that same year. Not to mention the fact that he has scored the most goals internationally than any other American (42 and counting). And he's only 27. 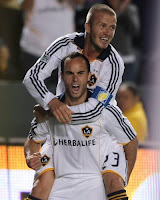 Recently, in 2008, he was loaned to Bundesliga powerhouse Bayern Munich for a short 3 months whilst MLS was in temporary hiatus. He has seen his share of scorn with the media (Mexican, American, Beckham circus), and he has continued to be a scoring threat in MLS. Lately, during MLS's long winter break, he has been linked with Everton of the English Premier League. The Galaxy has said nothing is set yet. But where should he go?

1.) Europe. A common denominator for someone with his talent and potential. He's not terribly young, however, so it's unlikely that major teams such as Man U., Barcelona or AC Milan will try to snag the attacking midfielder/withdrawn forward US international. His stint with Bayern Munich failed to impress the established Bavarian side and his size isn't terribly suited for the Bundesliga.
Some argue that Italy or Spain may be better venues for the speedy American. Why not a team like Deportivo La Coruna, Almeria, or even Valencia or Atletico Madrid. And why not an Italian side like Atalanta or Bologna. Indeed, at one point Livorno came around asking for a transfer figure. This may be the Achilles heel of his career: he's just too good a player to go on a small transfer figure. And $10 million is enough to turn down even the more deep-pocketed teams in the old continent. Not when there are younger players from Brazil, Argentina or Cameroon waiting to be discovered.

2.) Mexico. Why is this not being discussed more often? I've heard enough rumors about Club America wanting to hire Donovan. Indeed, a team with the resources like this Distrito Federal side would be a great match for him. Why? He speaks fluent Spanish. He plays very fast, ground-based, passing-rich soccer. And the Mexican fans hate him. But if he turned that hate into love through a club jersey it would be the ultimate flip of a coin. Mexico gave us Blanco. We give them Donovan. Not to mention the fact that he would get to know Mexican players and style better (always a positive given the structure of Concacaf competition and the tug-of-war between the two nations).

3.) MLS. Yes. Why not? Why can't our best player just stay here? He's not wasting his time. He's not "getting worse." He's not not scoring games internationally anymore. He's not losing his spot in the national team. The truth is that MLS, outside of its various faults, is a growing league with increasing potential. The league is more competitive than many others due to the nature of its salary cap. The Galaxy is an excellent squad with a bona fide coach in Bruce Arena and another superstar like Beckham. Given a few years and this team could become a superclub (albeit just in Concacaf). This, of course, would happen more easily if teams had more cash to spend. But it's not out of the question. 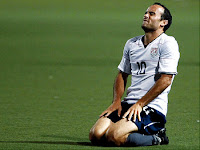 In the end, Landon Donovan is a world class player. He took his national team to great heights both as a youth (U-17) and as a senior (2002 World Cup, 2009 Confederations Cup). He plays for a world-renowned team (LA Galaxy) and is the top scorer for the national team. Wherever he ends up, he will be great. That's just the kind of player he is. I will calmly sit down and enjoy watching him play, wherever he is.

Wow I think like six of those goals were against Ecuador.

yes, it was a hat trick vs Ecuador like 3 years ago