Today Real Salt Lake, MLS playoff wild card, beat the reining champs Columbus Crew by the score of 3-2, with a 4-2 aggregate after winning at home last week. Was it a fluke? Hardly. Do they deserve it? Yes. Does Columbus deserve not to win again? Not really.

There are many haters of the playoff system and its contrast against European-style leagues. Other leagues in this same continent have playoff or "liguilla" formats as well, Mexico being one of them. In Europe, in the big leagues, the champions are decided by total points accrued during the season. In MLS, point totals positions you in the standings and sets up the playoffs. Eight of the fifteen teams in the league proceed to the playoffs. Home-and-away series for the quarterfinals, decided by eastern and western conference. A single game semifinal with the higher seeded team as host... and the MLS cup at a "neutral" location--this time in Seattle.

There is, however, a title for the highest amount of points in the regular season--the Supporter's Shield. It doesn't get the attention it deserves but it counts as a trophy and earns passage to the Concachampions (Champs League in Concacaf). In Europe, we could call this the league title, with the playoff being more of a cup like the Copa del Rey in Spain and the FA Cup in England. We shouldn't forget the US Open Cup that more closely mirrors the FA or League Cup in England where most amateur-to-professional teams all vie for the same trophy. In the US, USL leagues and other American small teams are allowed to compete against each other and against MLS.

In the end, Americans love their playoffs. It's part of the sports atmosphere in this great country. It's the legacy of years of media coverage and sponsorship deals and consumerism. Soccer may be a different beast in some aspects but in the end it is nothing but a sport... and you can attach playoffs to any sport. Case in point, the ultimate soccer tournament... the World Cup.

When a league is as competitive as the MLS, mostly thanks to the salary cap, any team that enters the playoffs has a shot. There are no seven game series here. You have to bring your game to the 180 minutes (or 90 minutes for single games). Robert Warzycha chose not to play 2008 MLS Cup MVP Guillermo Barros Schellotto in the game at Salt Lake. The Argentine virtuoso did score today, twice, but the final tally was 3-2 in favor of RSL. We will question his wisdom in subtracting him from the squad in the first game... and it will haunt him. 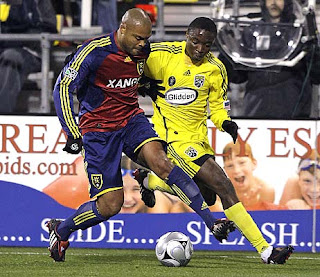 This is MLS. These are the MLS playoffs, love them or hate them. Last year, lowly New York defeated then-champs Houston to advance to an improbable final. Who's to say that can't happen again? RSL is capable of taking down both New England and Chicago, with the former being a more likely win. It should be fun to watch. At this point, everyone should take this tournament as it is... a cup... and this always means that, in the end, all bets are off.
Posted by R. Mera Velásquez at 11:45 PM