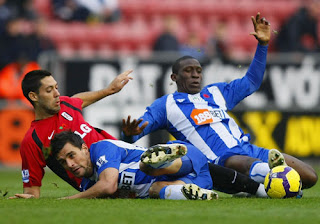 And he's back! Clinton "Deuce" Dempsey has returned to the club form his fans have loved him for here and in the UK. After spending the last three months without scoring for Fulham in the Premier League and lukewarm games with the national team, Dempsey has scored in three consecutive league games. It couldn't come sooner for a Craven Cottage team in dire need of results to escape the relegation zone.

As far as the US national team, Dempsey is always spotty at best in terms of midfield play, but always a wild card in any given match. His greatest moments happen when you least expect it, when you've given up on him, when no one else in the team can do it. Examples abound: from his incredible header against Egypt in the Confederations Cup to seal the US's passage into semifinals, to his opportunistic goal against Spain to dethrone the number one team in the world, to another brilliant strike against Brazil in the final, and to his game-tying header versus El Salvador in the qualifiers.

What do we make of him? Is it just that he plays better at Fulham than the US? Is it that Bradley Sr is not exploiting his style? In Fulham he tends to drift much farther upfield into a withdrawn forward position. He is nearly always in good position to shoot or pass. With the US, he is pulled farther back, where his talents aren't as exploitable and he looks lost or out-of-touch during the match. It's a game-changing option for Bradley, however, because he can drift Dempsey into an attacker position and redraw his offense. The question is, do we put him there to start the game? Do we keep it as an option only? Can anyone else step up in the midfield role?

An answer might be Holden in the midfield and Dempsey up front with Altidore. A three-pronged attack could have Donovan slide forward as well in a 4-3-3 formation. The question there is who you would put in the midfield and against what team this formation could work. Similar tries with a more limited squad failed in Costa Rica. If Feilhaber can step up his game, and Holden, Torres, and Bradley Jr can continue their form, then this may be an option against a lower-seed team in South Africa. The addition of Jermaine Jones and Edu's imminent return could also shake things up a bit. Don't discount Beasley yet; the man is making it known he still has it with back-to-back appearances for Rangers.

Right now, Dempsey is a key for the US attack thanks to his superb vision and positioning. He and Donovan mark the difference. In Fulham, Dempsey is another ace up Roy Hodgson's sleeve. He is a workman in the Cottager offense. A mainstay for the team. And a great goalscorer.
Posted by R. Mera Velásquez at 12:34 AM