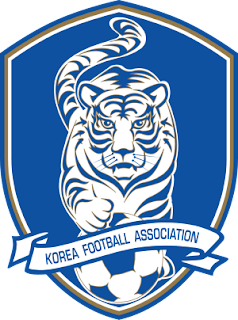 South Korea were always the perennial Asian representatives in the World Cup, and even though I don't remember them from 1986, I remember them fondly as a fast, tireless crew. South Korea has appeared in the tournament on seven occasions before. They became the first and only Asian team to reach the semifinals and have won the Asian Cup in 1956 and 1960.

Memories of 1990 are scarce since they were deemed to be one of the "easy teams" in the tournament. They played the part and went three and out in the tournament losing games to Uruguay, Belgium and Spain.

In USA 94, things were a bit different. Korea had evolved into a firepower in Asia and also due to increased domestic play. They had an impressive match against Spain, coming back in the final five minutes to tie the game 2-2. They had a chance at surpassing the group stage with a victory against lowly Bolivia but they were thwarted by the "altiplano" side and settled for a scoreless tie. Next came a game against champions Germany. The game was set to be a slaughter as Klinsmann and crew were up 3-0 on the scoreboard at the half. The Koreans fought back just as they had against Spain and scored two goals early in the second half, giving them enough breathing space to dream. It was not to be however, but it did expose Germany's weaknesses (which Bulgaria would exploit later in the tournament).

Going into France 98 knowing they would play co-hosts in 2002 made the South Koreans hungry for good results. However, they were pitted against world veterans Holland, Mexico and Bulgaria. Two losses by wide margins against Mexico and Netherlands sank their hopes of advancing. A tie against Belgium was only a consolation. 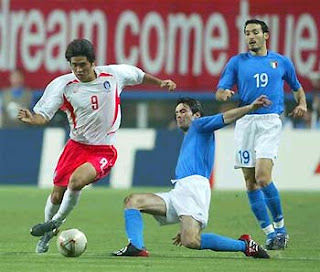 If Asia as a whole was deemed to be the weakest confederation (outside of Oceania), then 2002 would prove us all wrong. Both Korea and Japan capitalized on home-field advantage and Korea would take their game all the way to the semifinals. 2002 was also the time for Park Ji-Sung to step into the spotlight (now a regular with Manchester United). Korea is actually a pretty special memory in this tournament since they were pitted against the USA. A dominant 2-0 win against Poland set them up for a decisive match against the Americans (which had beaten "contenders" Portugal). They started losing that match thanks to a goal from Clint Mathis but they would come back to tie the game. The last group game was against Portugal and all three teams (Portugal, USA and Korea) were depending on the outcome of the match. Park's goal in the 70th minute dispatched Luis Figo's side and, at the same time sealed their place in the second round, as well as the Americans.

This is certainly where the magic (and controversy) begins. Korea was pitted against three-time world cup winners, Italy, in their first game outside of group play. Christian Vieri's early goal was a dagger in the hearts of Korean fans, but, true to their fighting ways in 1994, Hyeon's goal in the 88th sent the game into extra time. Frencesco Totti would be ejected on a second-yellow for a soft dive in the area that would have resulted in an Italian PK. Later, Tomassi would be ruled offside although he clearly wasn't. Jung-Hwang would make it 2-1 in the 117th minute, unleashing a festival in the streets. Asia finally had a team in quarterfinals. The game's result was largely blamed on Ecuador's own Byron Moreno (the referee), and conspiracy theories suggested that FIFA wanted Italy out and Korea in to ensure a host nation would advance in the tournament. 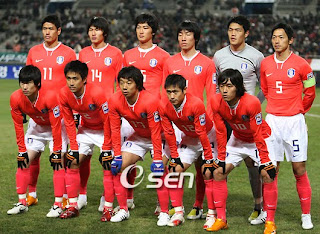 Korea's game against Spain would spark further controversy, as it was Byron Moreno officiating once more. The game ended 0-0 and went to penalties, where the host nation prevailed. Their semifinal game against Germany resulted in a loss thanks to a late goal by Michael Ballack. Their luck also seemed to have run out when they lost the 3rd place match against Turkey.

In 2006, Korea was armed with several weapons playing their trade both domestically and in European teams. They were pitted against France, Switzerland and Togo. It started well for the Koreans, beating newcomers Togo and tying a struggling (at that point) French team. An eventual loss to Switzerland proved to be the difference, as France ended with 5 points, the Swiss with 7, and Korea with 4. 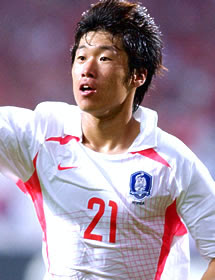 In 2010 they will play against Argentina, Greece and Nigeria in what could be considered a group of death of sorts (mid weight considering the South Americans play of late). Park is hoping to take his stellar Premier League game to new heights and the Asians are out to prove that they can advance in a World Cup outside of their own soil. Also in the team are Sung-Yong of Celtic, Chun-Yong of Bolton and Kim Nam-Il of Tom Tomks (Russia).

Highlights from 2002 game vs Italy: