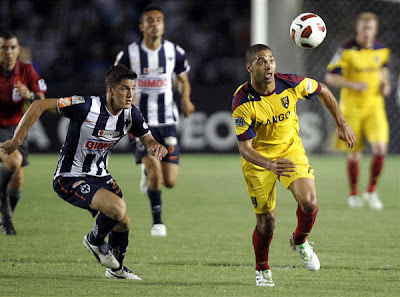 Real Salt Lake took the first step into uncharted territory: championship of the Concacaf Champions League. They did so by tying 2-2 against a powerhouse of the western hemisphere: Monterrey. Monterrey includes players like De Nigris (Mexico), Neri Cardozo (Argentina), Walter Ayovi (Ecuador) and world-renowned Humberto Suazo (Chile). Real Salt Lake fought back twice on the scoreboard to level the game at a packed Estadio Tecnologico.

It was the play by Nat Borchers, Jamison Olave and Nick Rimando which anchored the Real Salt Lake defense. In the midfield, captain Kyle Beckerman and Javier Morales built and distributed plays. Espindola and Saborio had frustrating nights, as they were continuously shut down by the Monterrey defense. This, however, allowed for players like Borchers and Morales to create chances that developed into goals.

Jason Kreis played his cards well tonight. He maintained a good defensive posture that allowed for his midfield to spark into action when his attackers were marked. Two wonderful goals gave the team, the city and the league reason to believe that silverware is possible next week. RSL carries a two away-goal advantage into Rio Tinto Stadium (where they are undefeated in 36 games). A win in the next game or a 0-0 or 1-1 tie means RSL takes the title, MLS and its fans are behind you, RSL. You are MLS.