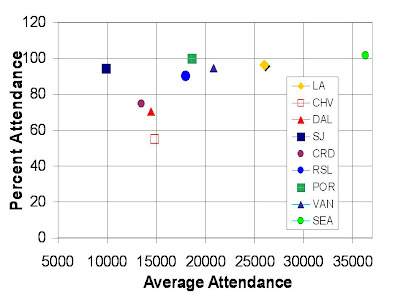 Weeks 5 and 6 had to be a combo due to the midweek matches. Real Salt Lake gets a pass for the Monterrey games. We're all behind you as MLS fans.

New England continues to struggle, as does Chicago and Columbus. New York, surprisingly, is also well below its stats from last year. This is quite inexcusable due to the form of Henry, Ream, Agudelo, Marquez, Lindpere and just the team in general. The lowest attendance has been 14,000, well below the capacity of 25,000.

I make a lot of points about relative attendance, which is the actual numbers divided by the capacity. It's an interesting statistic worth exploring when one sees how full (empty) a stadium really is. Bigger stadiums look emptier than small ones depending on crowds. When it comes to Western Conference teams, stadiums are typically much fuller than the East. A simple scatter plot above shows the relationship between relative and average attendance. Notice that many teams are close to 100 even though some, like San Jose, have smaller stadiums (i.e. higher relative attendance). Conversely, a team like Chivas is much lower in the relative axis due to its large capacity (27,000).
Posted by R. Mera Velásquez at 6:01 PM