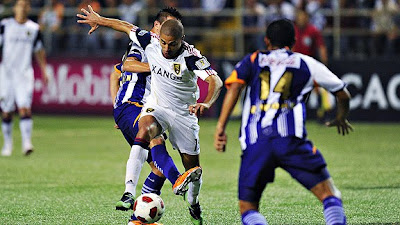 Real Salt Lake made history tonight by reaching the final of the Concacaf Champions League. They were the first MLS team to advance to the semifinal and have now taken the next step after defeating Saprissa of Costa Rica. It is truly an accomplishment for both the team and the league. It can be argued that the level of play in MLS has risen to new heights with player development, expansion and the influx of top players.

A couple of things need to be acknowledged, however. This isn't the first time an MLS squad reaches or wins a continental tournament. DC United first won in the tournament's previous incarnation, the Concacaf Champions Cup, in 1998. This was followed by the LA Galaxy in 2000. So, it's not technically a first but more of a renaissance of American soccer. Remember, however, that those teams still practiced the archaic MLS style of countdown clocks and shoot-outs.

If there is another important point to make about the current level of play of Concacaf and the MLS, then we have to turn to the Mexican Primera. Theirs is a premier league and the best in the Americas along with the Brazilian and Argentinean leagues. Mexico is a heavy importer of talent from South America and they have also become decent exporters of players, i.e. Javier Hernandez, Rafael Marquez, Carlos Salcido. They are also heavily involved in the South American Copa Libertadores. That alone raises the expectations and quality of the league.

This is where the competition gets truly special for Real Salt Lake and MLS. Can it top a premier soccer team from Mexico? Can MLS live up to the level the national team has played in for the past decade?

The Concacaf Champions League is fun to watch just because so many more teams are in action and more of MLS is exposed abroad. It's curious perhaps, that it was expanded from the 8-team Champions Cup to the format it's in today mainly because it coincided with the arrival of Beckham and the Designated Player Rule. Coincidence? Why not spread the wealth of marquee international players for all of North and Central America and the Caribbean to enjoy. MLS is unique in the Americas in its import of global talent. It's time, perhaps, to see this reflected on the pitch by winning a continental tournament.