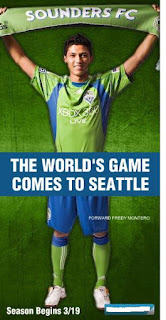 Welcome back to another edition of MLS. It is now season 14 and things are looking up (and in some instances looking down). Through the Beckham saga we have acquired new meaning abroad and domestically. The league is now 15-member strong with the addition of Seattle as an expansion team. And what an expansion team it is! A (probable European-bound) Freddy Montero opened up his account in MLS with two goals in a 3-0 win for the Pacific Northwest team on Thursday night of last week. Present was a sellout crowd of 32000+.

Added to Seattle's success is the addition of two more west coast teams--Vancouver and Portland. Both were USL teams (Whitecaps and Timbers respectively) so a form of "promotion" seems to have occurred here. Indeed, as remarked by ESPN Soccernet's Ives Galarcep, the Pacific Northwest offers a sizable contingent of true soccer fans dying to have a professional team to call their own. Leave it to Drew Carey (Seattle) and Steve Nash (Vancouver) to add a little flair to ownership plus a great deal of enthusiasm. Last I read Vancouver had already sold 5000 season seats for their debut in 2011. Waiting for their debut is also next-year's Philadelphia.

But not all is bright in MLS land. An expected, sub-par Beckham-less crowd of 18000 came to see the Galaxians face DCU in their home opener at the Home Depot Center. That's a small crowd compared to its capacity of 27000 (frequently filled last season with Goldenballs in the team). Dallas somehow managed to get in almost 16000 fans (probably there to see Blanco). They could use a DP injection, as would Houston. The two-time MLS Cup champions also opened to a reasonable crowd, even with Columbus (reigning champ) and Barros-Schelotto on the pitch. I hear, however, that the men in orange may be close to signing a major Mexican international. That would be a good start.

Disappointing, in soccer terms, were teams like New York (2008 runner's up), Dallas, San Jose and KC. I'm also sad to hear comments from abroad about the state of our league. Hopefully time will change this. In terms of positives, it's very interesting to see Toronto play so well. They have a very deep squad with the likes of DeRosario, Guevara, Ricketts, Dichio, Wynne and Frei. They may be even scarier if management is able to secure a designated player.

As always, I'll let the stats do the talk for me. Throughout the season I hope to have up-to-date attendance analysis graphics on the right column. I welcome feedback.
Posted by R. Mera Velásquez at 9:41 PM

I was wondering if there was any way that we can click on the graphs and get the exact numbers used in the graphs on the sidebar. MLS' attendance this year will be interesting because the league is gaining traction but at the same time the economy is affecting all major sports.

I have sort of a copyright on the figures and some of the numbers used... but the raw data (attendance numbers for each team for each game) can be found on the MLS website. You can also view some of the analysis numbers others have used in the past and present at bigsoccer.com.
I can always send you a couple of numbers that you may be interested in (pretty much any number I have).
I just don't want people to take my analysis without credit for my work. This might happen if I put up all the numbers. I hope you understand.