The girls came to play: From WUSA to WPS 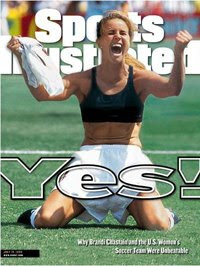 Women's soccer. Nowhere on the planet is the sport more synonymous with females in professional sports than in America. Okay, let's skip out on ice skating, WNBA and LPGA. If you think soccer in the US then you think 7-8-9 year-old girls that you probably coach without having any knowledge of the sports' tactics or intricacies. Who cares, right? It's just little girls playing. Then there's the amazing Mia Hamm, "Bend it like Beckham," and who can forget Brandy Chastain? Her take-my-top-off to celebrate the goal made the Sports Illustrated cover and many national newspapers here and abroad. Why can't girls show off too?

And now comes their time. America's newest venture into female sports hopes to change a past tarnished by its previous incarnation, WUSA (Women's United Soccer Association), which failed horribly due to mismanagement, poor marketing, low attendance and a hyper-low budget (basic salary for low-level players was $7000 per year). Enter the Women's Professional Soccer (WPS) league. Revamped, renewed, refurnished, re-budgeted and reconstructed. I can only hope that this league sees it through the night that is an already overloaded American sports scene plus a bad economy.

I have to admit that I wasn't initially in favor of this league seeing the MLS struggle as it has (even through the Beckham circus). I think the stakeholders know what's important for the game and for the women in the sport in general. As I read a piece on MajorLeagueSoccer Magazine I agreed with the fact that this country has the premier level in play from the ground up (that's your little girls in the local park). No one can deny the strength of our NCAA leagues or our high school girls' teams.

WPS is now in the process of bringing in the considerable international-level stars that circle the globe. Incoming already is Brazilian Marta. An exquisite player with a keen eye for goal and who would give Mia Hamm certain competition. Players from other dominant leagues like Germany and Norway (also powerhouses in the female version of the sport) may find it hard to transfer to this side of the pond. The water's a bit cold still and WUSA's demise is fresh in many players' minds. Recent economic struggles domestically and abroad sure won't help things. But, as I always remark, there's plenty of room to dream.

Has to be more exciting than the WNBA, zzzzzzzzzzzz.