Every point matters: Why Ecuador won't be in South Africa 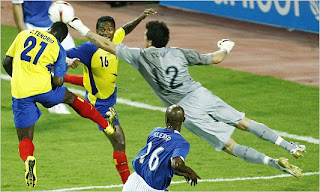 Ecuador 1 - Brazil 1. Quito. From a historical perspective I feel it's only logical that the game would end this way. Then again, things have not been at all logical in South America for the past 10 years. Since then, Ecuador's rebellion against a sad, unaccomplished soccer team has changed into a world class squad with players in multiple European leagues. But normalcy always rebounds into action. Here we have a string of bad results starting with Copa America 2007, where Luis Fernando Suarez's schemes became ineffective and the Ecuador Federation (FEF) decided not to act.

Unlikely as it may have seemed, Venezuela, the infinite Cinderella in South America took a 1-0 victory in Quito on opening day of the 2010 qualifiers. A sad start for an immobile squad, stagnant in depth and perception. And I'm not bashing the players altogether. The core remains but their focus has been refined by Suarez's successor--Vizuete. Back to the start of qualifying... After the Venezuela debacle, Ecuador went to face two of CONMEBOL's toughest teams on the road: Brazil and Paraguay. Both were terrible losses with a -9 goal differential.

Vizuete did some magic after Suarez resigned following Paraguay's 5-1 thrashing of Ecuador in November of 2007. Peru would fall to Ecuador 5-1 in Quito. An important, almost win in Buenos Aires would come early in the summer of 2008. Argentina was on the verge of losing at home to lowly Ecuador. Fate (referee) intervened, time was overallowed and Argentina would tie the game in injury time. To follow was a painful tie at home versus Colombia. That's 5 points in 6 games.

Vizuete, however, would go undefeated in qualifying for six straight games including ties in Argentina and Uruguay. Home wins versus Bolivia and Chile added to his impressive run. 12 points and it was time for return matches in South America's marathonic qualifiers (all 10 teams play each other in home-away fashion). A revenge win away to Venezuela would help matters. This is where things went wrong for Vizuete. A string of injuries and suspensions left him with a depleted side against a Venezuelan team vying for its first entry into the World Cup. 3-1 in Puerto Ordaz was the score. Ecuador was left with 12 points and outside of qualification zone.

A new year. A new(ish) team. Caicedo has been building up his resume in Manchester City, the back line has mostly returned to Ecuador (except for Hurtado in Colombia) and the midfield is in flux. Cristian Noboa from my birthplace, Guayaquil, summed up a great career year with Rubin Kazan of Moscow. He was called into the latest squad for the games at home versus Brazil and Paraguay. And he delivered.

The latest game against Brazil should have gone to Ecuador. More chances, more shots, more determination, more fans. It was not to be. Even when it seemed like a 1-0 win was imminent, a cold splash of water came with Julio Baptista and a 0-1 score now glared from the scoreboard. But an important change in the squad, switching Joffre Guerron for Cristian Noboa paid off with a goal. A tie at this point in qualifiers is not a good sign, not even against Brazil.

The ghost of the numbers game is now upon fans of the Ecuador national team. A familiar sight, albeit one we have not seen since France 98. With Paraguay, Argentina and Brazil all but locked it is now between Uruguay, Chile, Colombia and Ecuador for the 1.5 spots left. The half-spot will go against Concacaf's 4th placed team. At this point in the last two qualifying campaigns the team had 16 (2002) and 18 (2006). For the 2010 campaign, Ecuador has 13 points going into the next match. Next up, Paraguay in Quito. A must win.
Posted by R. Mera Velásquez at 9:43 PM

Yea does sound like they are in rough shape. When I saw the score I thought it had said the game was in Brazil, which would have made it a more impressive result.