USL and MLS: the live experience 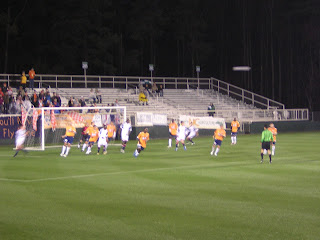 In what I hope to have as a semi-tradition, I attended a friendly pre-season match between my local USL club, the Carolina Railhawks, and an MLS team, New England Revolution. We braved 39 degree temperatures and a steady light rain. I was pleasantly surprised to see a good number of people braving the weather for this season's inaugural match (at least on our side of the stadium). The Railhawks won 1-0.


This time around, as I had alluded to in a previous post, the stakes were higher due to USL's place in American soccer as well as within the international scope of the region, the CONCACAF. I wanted to see just how well a USL side could play against a "top tier" MLS team. Last year's match between New York and the Railhawks was very one sided for the eventual MLS runner's up. However, lately the USL has represented the second-tier league in the Concacaf Champions League through Montreal Impact and Puerto Rico Islanders, and they have done so in style and successfully. Puerto Rico has gone through to the semi finals after beating Honduran team Marathon and Montreal Impact lost to Santos Laguna of Mexico after an amazing run that saw them win the first leg before 54,000 fans and a second game that they lost only in stoppage time. 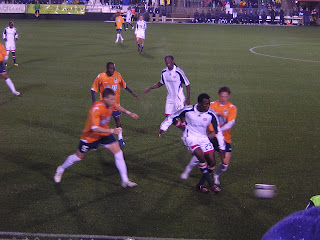 Mark Schulte scored the game-winner for the USL side during the first half, to the behest of a frustrated Jeff Larentowicz. I admit that I don't know many players on the Carolina side, but most of them got playing time (substitution rules are much less stringent in unofficial friendlies). The USL-1 team has former MLS players (Brian Plotkin, Columbus; Daniel Paladini, Chivas; John Gilkerson; New York) as well as some international players (Marcelo Romero, Spain; Sallieu Bundu, among others). I did recognize most of the New England squad, however. Jay Heaps, Nyassi, Mansally, Joseph, Igwe, Reis, Dube were there. The Gambians (Manssaly and Nyassi) impressed me, as did Alston (rookie).

It may be true that sometimes games can be unpredictable in friendlies as well as cup games (F.A. Cup in England, Copa del Rey in Spain, US Open Cup in America). However, what seemed like a line of 3 at the back for the Railhawks yesterday, their style of play and treatment of the ball was quite noteworthy. As was the scoreline in their favor. Distances may be shorter between leagues but a special attention should be placed to further partnerships and interactions among the two leagues. 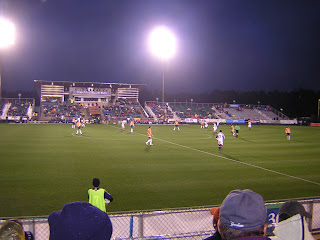 As a side note, I propose an interesting relegation scheme for MLS... how about every season there are 3-4 teams from top USL side in the league, with two of them being relegated each season opening the way for another two USL teams. A total of 20 teams in the league can still be reached, as well as a wider audience that is increasingly favoring soccer as a top sport. Case in point: 2009 MLS expansion team Seattle Sounders has already sold out their 20,000+ season tickets. They debut on Thursday March 19th on ESPN2 against MLS Cup runners-up New York Red Bulls.
Posted by R. Mera Velásquez at 3:38 PM

Enjoyed your article and hope you can make it to more RailHawks games besides only the times MLS comes calling.

The new management of the RailHawks are very much in to bringing an authentic footballing atmosphere to the RailHawks this year (after a couple of years of carnival/sideshow madness) and the style that Rennie is trying to instill looks to be highly entertaining.

There's plenty of very knowledgeable football fans in the 204 Depot (the drum-toting posse behind the south goal) and I'm sure you'd enjoy joining us on ocassion. I hope to meet you in person at one of the upcoming matches.

Love the relegation idea, I have long proposed it in other major sports, it is my favorite aspect of English football.