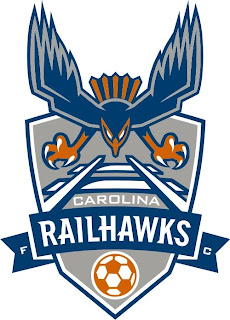 Just yesterday I received a pleasant, albeit unexpected phone call. It was the Carolina Railhawks on the line wanting to know about my experience at the game, input I might have and the kind of media I'm most in contact with (that being XM, FSC/ESPN, the Internet). Granted, I've only been to one Railhawks game, last year, against the Red Bulls in what I hoped (and my wish was granted) would be Jozy Altidore's last season with MLS. It was a great experience, a great although uneventful game, good family atmosphere, some scattered Hispanics reminiscing days of futbol, and even some rowdy fans pulling for the men in orange on the far side of the stadium (WakeMed Soccer Park).
The Railhaks belong to America's so-called "second tier" (lower division) United Soccer Leagues or USL-1 [a reader actually commented it is an alternative league to MLS and that is correct]. After reading up on them I found that they have several divisions including player development, women's leagues and tryouts. They, of course, compete in the US Open Cup, one of the oldest soccer competitions in the world and which pairs up amateur, semi-pro and professional teams in a cup-style format. The USL has teams in the United States, Canada and the Caribbean. Two of these teams, Montreal Impact and Puerto Rico Islanders, advanced through the play-in and group stages of the Concachampions and are now in the quarterfinals. Only Houston made it through out of 4 MLS teams. 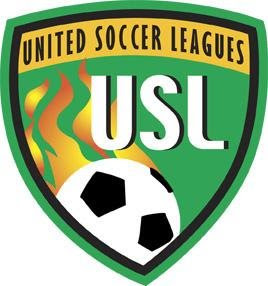 I alluded to MLS's recent failures when addressing Concacaf competitions previously and I will not dwell on it here. Instead, I want to point out the obvious high level in the USL. They continuously feed players into MLS and ingest players from the league after their time in MLS competition has expired due to age or performance. But is there a real, true relationship between the leagues? Short answer is no with a but since MLS does, indeed, prick off the best of the best from USL. And yet, after some serious sleuthing, I found that there are a lot of concerned fans of the game out there either on BigSoccer or personal/professional blogs that are collectively annoyed at the lack of relationship between these two institutions. I've read a lot about the youth development in MLS and US Soccer in general but USL seems to be putting a lot of emphasis on this. They also become a repository for college graduates that don't make the grade in MLS or abroad. Reading through MajorLeagueSoccer magazine I've seen the great progress made with the youngsters, there is certain difficulty in transitioning youth development into first team status. Not too long ago it was individuals pointed out how Kassel of the New York Red Bulls saw significant red tape when trying to make a move to MLS. So, besides the attention to detail in the USL, why aren't there more avenues for cooperation? Unlike Minor League Baseball and how its teams are affiliated with MLB clubs, no such format exists between USL and MLS. Given that Americans are obsessed with "drafts" from collegiate institutions and that promotion/relegation has no chance to ever fly in this country, it would only be advisable, if not imperative, that a tighter bond occur between USL and MLS. College drafts, especially this year, do offer an excellent avenue for new players to join the league, but as Steven Goff of the Washington Post has alluded to recently, the omission of a reserves tournament and lowering the number of players in MLS teams will mean very few options for a gifted round of individuals that in the past generated players like Clint Dempsey and Maurice Edu. Generation Adidas, is another avenue for our youngsters that allows them to not count against MLS rosters but there are only a limited amount of spots.
Once expansion teams are fully integrated into the league, spaces will become even more scarce and a partnership with USL gains more attention. Already we've seen some involvement when teams like Seattle Sounders make the jump to MLS and feed in players from their USL squad, but this is not a widespread practice. Clearly, as the Concachampions has shown, there is considerable skill available in America's lower division and it falls upon MLS to learn how to tap into this resource in a much more seamless manner. In the meantime I think I'll enjoy the Railhawks play the Revs in March. At least I get to watch some soccer sometimes.
Posted by R. Mera Velásquez at 7:37 PM

Your assumption is that the USL-1st division is actually a second tier (lower division) to the MLS is incorrect. The fact is that the USL-1st is actually an alternative soccer league to the MLS. Until the MLS wakes up and smells the coffee and drop some of their silly rules (who's ever heard of the league owning all the players), the USL will continue to be an alternative league to the MLS, with similar or better quality (mind you not the advertisement dollars of the MLS) than the MLS, as the recent CONCACAF tournament has shown.

Whatever happened to the old A-League? Has that become the USL. Charleston used to have a team (and may still do) in one of those leagues and they beat a couple MLS teams themselves on the way to losing in the final of the cup about ten years back or so.

Very true. A lot of teams went from A-league to USL, 1 or 2. Charleston Battery is a very good team and they're still around. They actually were the first non-MLS team to make the final of the US Open Cup since the Rochester Rhinos in 1999. They lost the final of the OC against DCU last year by the score 2-1.