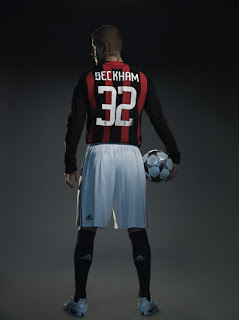 Ever since Beckham decided to make a loan move to AC Milan for a ridiculously short period of time (January-mid March) there have been plenty of rumors and speculations about his future in MLS. Last month I ran a poll for my faithful readers to gauge their thoughts on Becks' future. I believe the end result was something like 80% for and 20% against. I can understand some of the animosity towards the player for whatever reason: cheesy, pompous, over-the-top, spice boy, whatever. The point is that no other player in the world has transcended the soccer-society boundary in America since Pele. Just today, Soccer Insider remarked about the lack of soccer commercials in the United States and while this may be true, if you stick Beckham in there should not be a problem in terms of endorsing anything from his own men's fragrance to Gillette to Pizza Hut.
So what's at stake here? Clearly, MLS's visibility in the world stage, the quality of play, and most importantly, the attendance. Right now, a variety of usual suspects are weighing in on Beckham's ultimate decision: arguing for his impending exit are former Galaxy president Alexi Lalas, current teammate Kaka and even color commentator and former Tridnidad and Tobago goalkeeper Shaka Hislop. Others, like former French national and Chelsea player Frank Leboeuf and the player's own spokesman have remarked that the England star will stay with the Galaxians. Ultimately, for me, I think at least one more season with the Galaxy should be considered. Now, with Bruce Arena at the helm, the Galaxy may have a shot at the playoffs and even at the title. What makes for a better ending than that? How about a game broadcast on national TV (ABC) of a final between the Galaxy and another foe (maybe Chicago) for ultimate MLS glory? So what are the pros and cons of keeping Beckham here?

Beckham has always seemed like more flash than substance to me. Obviously he has a vicious free kick and can hit some sick in-swingers on the cross. His greatest success in the EPL came when he was surrounded by an immense amount of talent. Take that away and plant him on a mediocre side and he was unable to inspire the team with his play. At times he seems like more of a pretty face than a performer. He is being payed way to much to justify and I don't really get the hype - are we watching him because he is a soccer player - or a male model.

Thank you for this blog. I love soccer!!!!